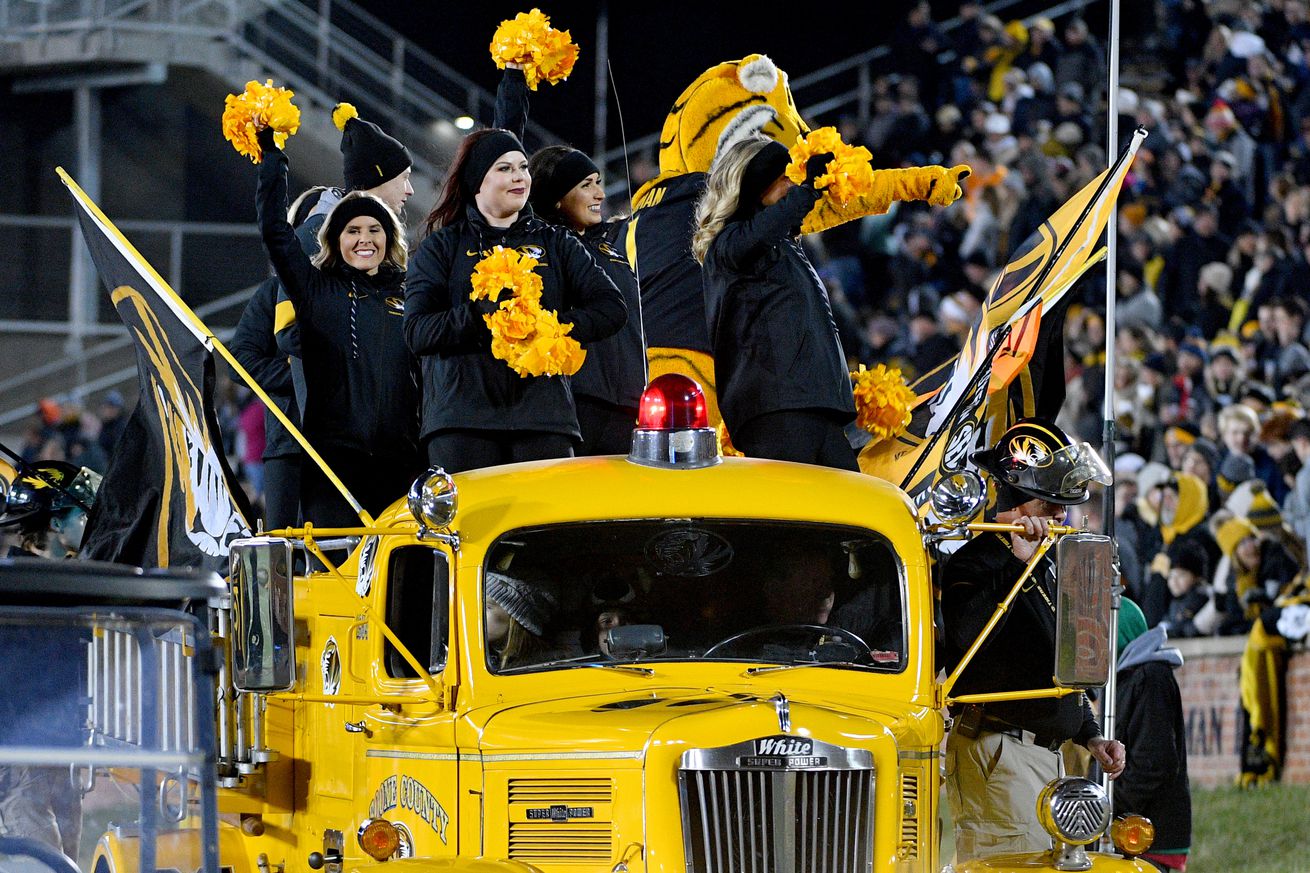 Rock M’s Fearless Leader made a tradition of this question for the basketball team starting in 2016, and now I have the honor of answering the question for the football side. This first edition of WWAWTSFMFIN20 (clearly we’re still workshopping the acronym….waw-tis-fem-fin-20?) is going to lean heavily into the unknown and skew towards clearing low bars. Why is that? Well, because you might have heard, Missouri has a new football coach! One who has had lots of stops and seen some decent success but has only been a head coach for one year and never really built a program! So the Tigers really need to hope that banking on the unknown pays off, and until we see how Coach Drinkwitz handles an SEC schedule with SEC players and managing a roster and coaching staff, we’ll just have to hope for the best and count on the worst. But enough of that, let’s get into the things that I’m hoping we all get to see in 2020.

One of the issues with the Odom-era was the amount of change around what the Tigers wanted to be on the field. Part of that is an issue with any first time head coach, but it was also partnered with staff turnover. Think of the top programs in the SEC: after 2013, Alabama changed to an up-tempo spread with mobile quarterbacks and a pass-rushing defense. Even with all of their yearly coaching turnover, that approach on both sides of the ball has stayed consistent. Georgia is churning out assistants and coordinators at an Alabama rate and still is a run first-run second-run third offense with a break-don’t bend defense. They both have a style and they recruit to it (that they are elite recruiters is helpful but not pertinent to my point).

What has Missouri been the last four years? With Josh Heupel and DeMontie Cross, Missouri was a warp-speed air-raid-ish offense with a pattern-matching 4-3 hybrid. Then they kept the speed-at-all-costs offense and canned Cross for a move back to the pass-rushing focused 4-3. Once Heupel took over at UCF, they moved to a slower, more complex spread with pistol influences under Derek Dooley and paired it with a kinda-sorta 4-2-5 with 4-3 defensive personnel. Of course, 2019 kept that Dooley offense and fully embraced the 4-2-5 on defense. I’m all about tweaking things and maximizing the athletes that you have, but there is a real benefit to having a style and recruiting to that. It’s how Mike Leach takes a 2-star or unranked quarterback with the exact skills he wants and turns him into a 5,000+ yard passer. It’s how any running back who goes to Wisconsin turns into a 2,000+ yard rusher. It’s how Ohio State constantly fields a defensive backfield of NFL starters. You find your style, find your thing, and recruit to it.

What’s Missouri going to be under Eli Drinkwitz? With keeping Ryan Walters and the defensive staff mostly on board I would assume they keep the 4-2-5, which is good. What will the offense be? Warp-speed? Throw-to-run? Mobile quarterbacks? Downhill running with heavy pistol influences? Whatever it is, make sure it fits and then recruit to that. Make Mizzou a brand in the way they play to get the kids they need to come in and make it successful. And Year One is a great time to figure that out.

Look at the 2007 Missouri starters that won the Big XII North:

Other than the heavy presence of kids who were from Missouri, notice anything? If not, that’s fine, take a look at the 2013 starters that won the SEC East:

If you haven’t gotten my point yet, that’s ok, let me lay it out for you:

2007’s roster featured 9 seniors, 12 juniors, 2 sophomores, and one of the greatest freshman performances ever seen at Missouri.

Both teams also featured an upperclassman quarterback with all upperclassmen in the defensive secondary.

I’m not going to say that recruiting rankings don’t matter, because they absolutely do. I’m also not going to say that a team of upperclassmen will beat a team of underclassmen every single time because they won’t. What I am saying is that, when you recruit at a substantially lower level than your peers – like Missouri does – you rely on down years to build an young roster that sticks together, gains experience, and breaks through all at once. Those surges don’t always work, mind you, because you need some scheduling wins and some local powers to falter:

-Gary Pinkel’s 2004 squad beat Big XII North champ Colorado but lost to ranked Texas and Oklahoma State squads and fell apart down the stretch against Nebraska and the Kansas schools. Oh, and that Troy incident we don’t talk about.

-2007 featured downs years from both Nebraska and Colorado while beating the other North usurper and only faltering against Oklahoma.

-2010 was nearly as magical as ‘07, but the highs of beating Oklahoma led to a slump against Nebraska and Texas Tech before rallying to close the year strong and notch 10 wins.

-2013 featured down years from Florida and Georgia and Missouri neatly filled in the gap. Fluky loss to South Carolina aside, Missouri was an excellent team that was 15 minutes away from an SEC Championship and BCS National Championship berth.

The point is, you need a young group of guys to play a few years together and take their lumps so that you can field a roster of upperclassmen all at once that are more mature, more experienced, and ready for the rigors of an SEC schedule. Pepper in a few younger, talented, mega athletes in as well and you have a recipe for a breakthrough. But you need to identify that core first and make sure they get plenty of starts and experience. My thought is that we’ll see that youth take the field these next few years in preparation for a breakthrough 2022.

As of this posting, Missouri’s recruiting efforts rank 70th in the nation, right above North Texas and right below Louisiana Tech. However, that’s with only 12 recruits, and after the second round of signings, I anticipate the national ranking to jump to the 50s.

When I reviewed the effects of a new coach on recruiting I discovered that, on average, a team’s recruiting percentile will fall 4.5% and the rank will diminish about 5.5 spots. 36th is where Missouri finished in 2019, so the 50s is quite a bit more of a fall than anticipated. The sample size in my previous piece, however, didn’t factor in scholarship limitations, of which Missouri is squarely under.

Therefore, when the 2020 season is drawing to a close and the Early Singing Period is upon us once more, I would like to see Missouri get back to the 40s at least, preferably in the 30s. There’s a lot of things that can happen in 12 months, so who knows how many scholarships will be available or what the rest of the SEC will be recruiting like. But even though Missouri doesn’t rely on recruiting stars to find success, one still needs to have some recruiting successes to either create excitement after a crappy year or add an exclamation point to a victorious campaign. Whether that’s continuing to develop the St. Louis pipeline, make stronger inroads to Texas, or open up other ‘crootin’ avenues… Missouri needs to be better than 50th in the nation in recruiting.

Like I said, clear low bars. I’m sure there are a few people out there that will look at Missouri’s schedule and then look at five wins and scoff at the perception that Missouri will have an issue clearing that. And with six home games, five true road games, and a neutral site tilt in Arrowhead Stadium against Barry Odom’s Arkansas Razorbacks, maybe you’re right. But this Missouri starting 22 is getting a significant makeover, particularly in the positions that count the most via quarterback, receiver, and defensive secondary. And they’ll be in a new offensive system with guys who were not good enough to start last year. That includes, unfortunately, a brand new offensive line. The 2020 schedule features:

-A Central Arkansas team that is Top 40 in the FCS SP+, been in the FCS Playoff in 3 of the last 4 seasons, and taken down multiple FBS programs in the past 3 years.

-Vanderbilt, who held a much more talented Missouri offense to 14 points.

-Our real SEC rival South Carolina, who the Tigers have only beaten once in Columbia East.

-An Eastern Michigan program that’s good enough that head coach Chris Creighton was being looked at for vacant P5 jobs. He’s taken the Eagles to three of the five bowl games in program history and taken them from the worst team in FBS to Top 100.

-BYU, in Provo, against the Mormon Manziel and the BYU Cougars.

-Louisiana-Lafayette, whose head coach this author openly opined for many times over to take over the Missouri program and lead his team to a Top 35 SP+ finish and 11 wins.

As far as the rest of the SEC schedule goes, what has Missouri shown in the past four years to make you think that we can guarantee a win against any of our conference or division brethren? A Kentucky team that, let’s face it, is just a better program at this point than Missouri is? Tennessee who recruits at a Top 20 level? Florida and Georgia programs who recruit at Top 10 levels? Maybe Missouri beats Arkansas and Mississippi State as they transition under new coaches but… so are the Tigers. No, I’m sticking to a 5-win expectation and would be ecstatic if Coach Drink & Crew are able to exceed that.

A 5-win campaign with a Top 40ish recruiting class is not an exciting proposition, I’ll admit. But we should – as should Coach Drinkwitz – embrace this year as an opportunity to truly rebuild a roster this regime wants and establish a culture whole cloth. When it comes to program building the old adage goes “lose big, lose close, win close, win big,” I don’t think that’s realistic at all, but the premise is accurate: let’s get our butts handed to us in 2020 but show that a bunch of younger guys get the style and playbook and get the experience in the hardest way possible. I want to see a starting lineup featuring Connor Bazelak, Elijah Young, C.J. Boone, Jack Buford, Kevon Billingsley, Isaiah McGuire, Devin Nicholson, Martez Manuel, and a whole slew of youngsters grasp the new playbook and get their reps against an SEC schedule and tricky non-con. Show improvement over the year, bring in solid recruits in smaller classes, and get ready to breakthrough in 2022 or 2023.

Do I want to see 10 wins, an East Division Crown, and a New Year’s Six bowl in 2020? Uh, yeah, I do. But it’s not going to be in the cards next year or even the year after that. It’s a year of culture building, a year of roster building, a year of losing, yeah, but a year of learning and getting better. It’s going to take commitment from this staff, resilience from the roster, and patience from the fan base. That’s what I want to see from Missouri football in 2020. Show me.