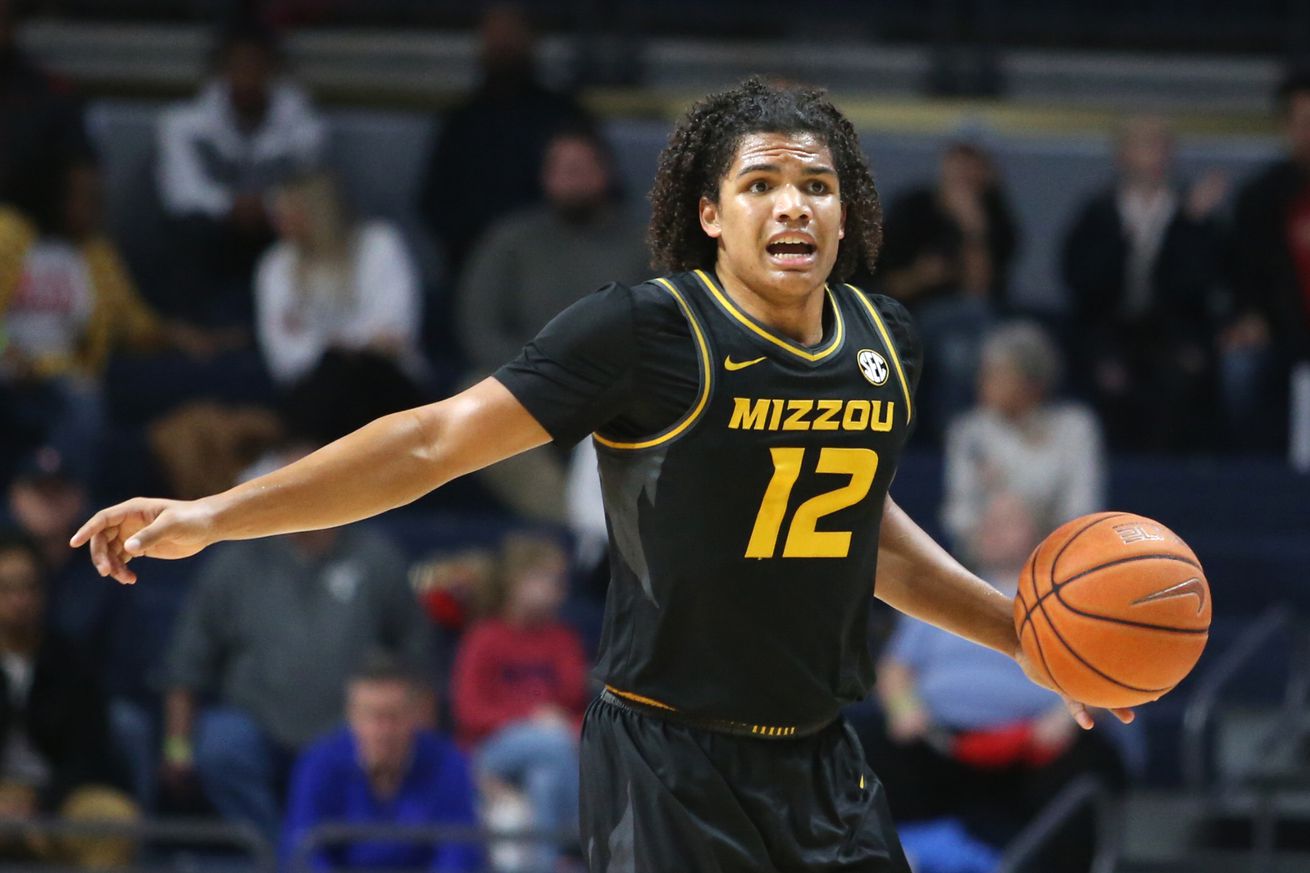 Dru Smith came into the season with high expectations, and was just about as good as we expected. What could he bring to the table in his senior year?

As we do every year, we’re wrapping up the Mizzou basketball season with Q&As on every one of Missouri’s major contributors. To catch up on our first few posts in this series, see the link below:

Expectations were high for the former Evansville guard coming into the season. Did Smith meet them?

Sam Snelling, Site Manager: Smith led in Adjusted GameScore on the season, and I don’t really think it’s arguable that he was the most valuable players. Therein lies part of the issue though — Smith isn’t a primary focus level of player despite his skill set. He’s a facilitator and the guy you want on the floor, but probably much better as a 3rd option instead of the first. I say all that, and I still think he’s an NBA-level player because of how many things he does well.

Matt Harris, Lead Basketball Writer: I think so, and he was probably their steadiest cog night in and night out. Out of necessity, played off the ball more once Mark Smith was hobbled, splitting the lead guard role with Xavier Pinson. That said, Dru’s assist rate was still among the top 10 in the SEC, and he led the conference in steal rate. And with Mark Smith laid up, Cuonzo Martin frequently tasked him with checking the opponent’s best perimeter player. How did Dru do? Among high-usage defenders, those who logged 250-plus possessions, his defensive rating (0.727 PPP) ranked third in the conference. We expected Dru to be a sober driver for the offense and a stingy defender. For the most part, he fit that profile.

Josh Matejka, Deputy Manager: Yes, and I’m not sure most Missouri fans realize it. Smith was touted as the ultimate glue guy coming into the season, a savior-type figure who would bring Missouri to a new level because of the amount of things he did well. We learned that he’s not good enough to cover up for the loss of Jeremiah Tilmon and Mark Smith and Torrence Watson, but Smith was plenty effective. He’s a strong defender, a great distributor and point man and a deadly free throw shooter. Xavier Pinson was the flashy name because of his highlight-reel passes and big scoring outputs, but Dru Smith was the man who ran the show… and stopped it from collapsing at several points during the year.

Ryan Herrera, Lead Basketball Beat Writer: I definitely think he met those expectations. He was supposed to be a guy who Cuonzo Martin could hand the ball to and expect to run the floor like a seasoned vet, and he did exactly that. He helped set the tone on both ends of the floor, performing very well on defense (he led the SEC in steals per game) and even moving seamlessly into a 1st option scorer. Should that be his role moving forward? Probably not, because he seems to be at his best when he’s creating for the other four players on the floor. But in a season that saw two of the presumed three best players on the team miss extended time, Smith took on that role with class and showed how important he’ll be to Missouri’s success next season.

Smith was an invaluable asset to the Tigers, but experienced a dip in some of his offensive numbers — namely in both two and three-point shooting percentage. What do you think caused the dip in his offensive efficiency?

Sam Snelling: For one, a move to being the primary option coupled with a step up in competition. But he also struggled from 3-point range much like the rest of the team, and simply being so poor from deep (and also taking more shots from deep) caused his numbers to dip. I’d feel better about Dru if he isn’t the primary option, and too often this season he was forced into that role.

Matt Harris: Like others will mention, his jump-shooting tailed off. (Granted, I think his 3-point shooting at Evansville was slightly inflated.) But that’s not Smith’s game, either. When optimized, he’s playing in high pick-and-rolls or running curls off the baseline. That gets tougher when defenses pack the lane and dare you to beat them from deep. Stepping up to SEC was going to be a challenge, but it’s magnified when teams can make operating room tighter.

You also can’t ignore the workload he shouldered. Over the final 19 games of the season, Dru averaged 31.2 per minutes, logging 35 minutes or more 13 times. Even if your usage is reasonable — Dru was at 23.4 percent in SEC action — the sheer volume of floor time adds up. Now, he did offload some ball-handling duties to Xavier Pinson, but MU’s offense often relied on Dru trying to crack the defense with a middle ball-screen late in the shot clock. Oh, and he was also tracking the best player at the other end.

Josh Matejka: Missouri’s offense — slow and often laborious — isn’t conducive to high levels of efficiency, especially on a jump-shooting challenged team, especially if you’re not dominating the glass. However, most of the problem likely comes from the fact that he had to shoot the ball more. Smith more than doubled up on his shot attempts from his sophomore season, so it’s not surprising to see a dip in efficiency. You’d hope he brings it back up in his senior year, but don’t put too much hope into those sophomore year numbers.

Ryan Herrera: Smith struggled with efficiency the same way most every player on the team struggled, though less obvious than a guy like Torrence Watson. His volume increased this season so it seems reasonable that his efficiency would decrease, and just like what happened to many players around the country, the extended 3-point line probably had some impact on his long-range shooting. Plus, injuries forced him to take on that No. 1 scorer role a lot, probably something Martin didn’t envision heading into the season. A dip in efficiency was somewhat expected, but that doesn’t mean those numbers can’t improve with a healthier roster next season.

Late in the year, Smith and Xavier Pinson formed a two-headed attack to kick start an oft-complacent offense. Is Smith-as-primary-scorer sustainable for Missouri’s success in 2020-2021?

Sam Snelling: I personally don’t think so. To be a more effective offense you need to be able to attack from multiple angles. Smith and Pinson are good attacking the paint, and it’s important to get another scoring wing to keep that aspect of the offense going even when Dru or Xavier are off the floor. With a healthier threat around the basket, some improved shooting, and Dru and X doing what they did down the stretch, I can see that path. But I think the best version of Missouri next year is one of Dru as a part of a group of players capable of being a top option.

Matt Harris: No. Both of their games rely on playing off the bounce and getting to the rim. There’s just one issue: converting shots. Combined, the guards only shot 47.2 percent at the rim and averaged 0.994 points per shot, per Synergy. The NCAA average? Around 55.1 percent and 1.14 PPS. Dru Smith and Pinson capable of exploiting advantageous switches, but building the offense around them attacking the paint isn’t the solution.

It’s why Missouri is pursuing a graduate-transfer like Justin Turner, a veteran with three years of consistent production as a fulcrum of an offense. Now, the question is whether the combo guard’s game, which is reliant using ball-screens to set up mid-range finishes, integrates smoothly in the offense. However, you can see the logic. If Turner shoots around 35 percent behind the arc, defenses will have to closeout, opening creases to exploit and setting up other facets of his skill set.

MU needs to find ways to spread the production around its starting lineup. That requires a healthy Tilmon drawing attention on the block, Mark Smith knocking down spot-ups, Pinson exploiting isolations, and Dru making smart reads in pick-and-rolls.

Josh Matejka: Probably not. Smith isn’t a bad scorer by any means, but his game doesn’t depend on him creating shots for himself. He’s talented at making plays, but he’s even better at making sure someone else is in a position to finish them. And while he’s probably not as bad of a jump-shooter as he was this year, he might not be as good as he was in last year in Evansville.

Some nights it’s OK to have Dru Smith as your go-to guy and leading scorer. But he’s much more valuable when he’s setting up others to do so.

Ryan Herrera: Again, I’ll have to say that his game isn’t best suited to be the primary scorer. He’s great at opening up space to get his own shot off for sure, but he’s at his best making plays for his teammates. For Missouri to be successful, it’ll take more guys than Smith and Pinson to shoulder the scoring load (looking at you, Mark Smith and Torrence Watson) and allow Smith to be more of a facilitator. Smith reached double figures 18 times last season, so it’s clear he can put up points when he needs to, but his role shouldn’t be the No. 1 option at all times. If he’s getting his points when he wants and his teammates are knocking down shots when he gets them the ball, the offense has a shot to flourish.