The Cardinals are acquiring lefty Jordan Montgomery from the Yankees, tweet Ken Rosenthal and Lindsey Adler of The Athletic.  Montgomery will be traded for Harrison Bader, reports Jack Curry of the YES Network.  The trade, which has been officially announced by both teams, also includes a player to be named later or cash considerations going to the Yankees, conditional on Bader’s playing time as it pertains to the plantar fasciitis that sidelines him at present. 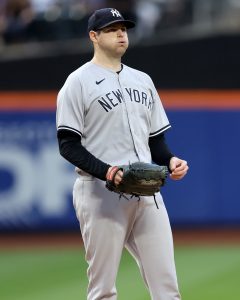 Montgomery, 29, is a big addition to the Cardinals’ rotation.  The lefty, a fourth-round draft pick of the Yankees out of the University of South Carolina in 2014, finished sixth in the AL Rookie of the Year voting with a fine 2017 debut, but saw his career derailed by Tommy John surgery the following season.  Since 2021, he’s settled in as a dependable member of the Yankees’ rotation, posting a 3.77 ERA in 272 innings across 51 starts.  While Montgomery’s strikeout rate has been down this year, so too has his walk rate, and he’s continued to keep his ERA south of 4.00.

Montgomery is earning a reasonable $6MM this year, and he’s due a raise through arbitration in 2023 before becoming eligible for free agency.  He was not necessarily thought to be available, but the Yankees just added Frankie Montas to the front of their rotation in a trade with the A’s.  Montgomery fits in well with the Cardinals’ pitch-to-contact rotation, which currently features Adam Wainwright, Miles Mikolas, Dakota Hudson, rookie Andre Pallante, and recent addition Jose Quintana.  Steven Matz, signed as a free agent in November, is out with a knee injury that could require surgery.  Former ace Jack Flaherty won’t be eligible to return from a shoulder strain until late August.  Looking ahead to 2023, Adam Wainwright may retire and Quintana could depart as a free agent, but everyone else remains under team control.

At present, the Cardinals sit three games back in the NL Central and are one game back from a wild card spot.  In addition to Quintana and Montgomery, the Cardinals also added Chris Stratton to their bullpen via trade.  The club reportedly expressed interest in many available starters before landing Montgomery, including Frankie Montas, Jake Odorizzi, Tyler Mahle, and Carlos Rodon.  Bader hit the IL for plantar fasciitis in his right foot in late June, with Dylan Carlson starting in center field in his absence.  Bader is currently in a walking boot for the injury.  Evidently, the Cardinals felt Carlson can handle the gig for at least the remainder of the season.  The Cardinals had been involved on Juan Soto, but reportedly hadn’t been willing to pair Carlson with their top prospects.

Bader, 28, is a native of Bronxville, New York, about 11 miles away from Yankee Stadium.  He’s served as the Cardinals’ primary center fielder since 2018, when he finished sixth in the NL Rookie of the Year voting.  Known for his defense, Bader picked up his first Gold Glove last year and finished second in the Fielding Bible awards voting.  Bader’s wRC+ sits at 93 this year, but he was at 111 over 526 plate appearances from 2020-21.  Bader, one of the speedier center fielders in the game, was limited to 103 games in 2021 due to a forearm strain and a rib fracture. 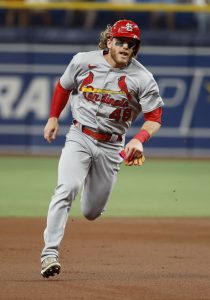 The Yankees have deployed the oft-injured Aaron Hicks as well as MVP frontrunner Aaron Judge in equal proportions in center field thus far this year.  Once Bader and Giancarlo Stanton are healthy, Hicks figures to see his playing time reduced.  The Yankees also recently added a new left fielder via trade, picking up Andrew Benintendi from the Royals.

Like Montgomery, Bader is under control through 2023.  However, due to a two-year extension signed in April, Bader’s salary was locked in at $4.7MM for both the 2022 and ’23 seasons, plus performance bonuses.  The Yankees will trim several million dollars off next year’s payroll compared to what Montgomery is projected to earn.

In parting with Montgomery, the Yankees have weakened their rotation for the remainder of the 2021 season, seemingly locking Domingo German into the fifth spot until Luis Severino is able to return.  With a 12-game lead in the AL East, that difference hardly matters.  Montgomery’s loss could be felt in the playoffs, especially if Severino isn’t able to build back up to a starting role, but evidently the Yankees feel the eventual defensive upgrade in center field is a net win.  The decision has, at least, elicited some “head-scratching” within the Yankees’ organization, according to Erik Boland of Newsday.