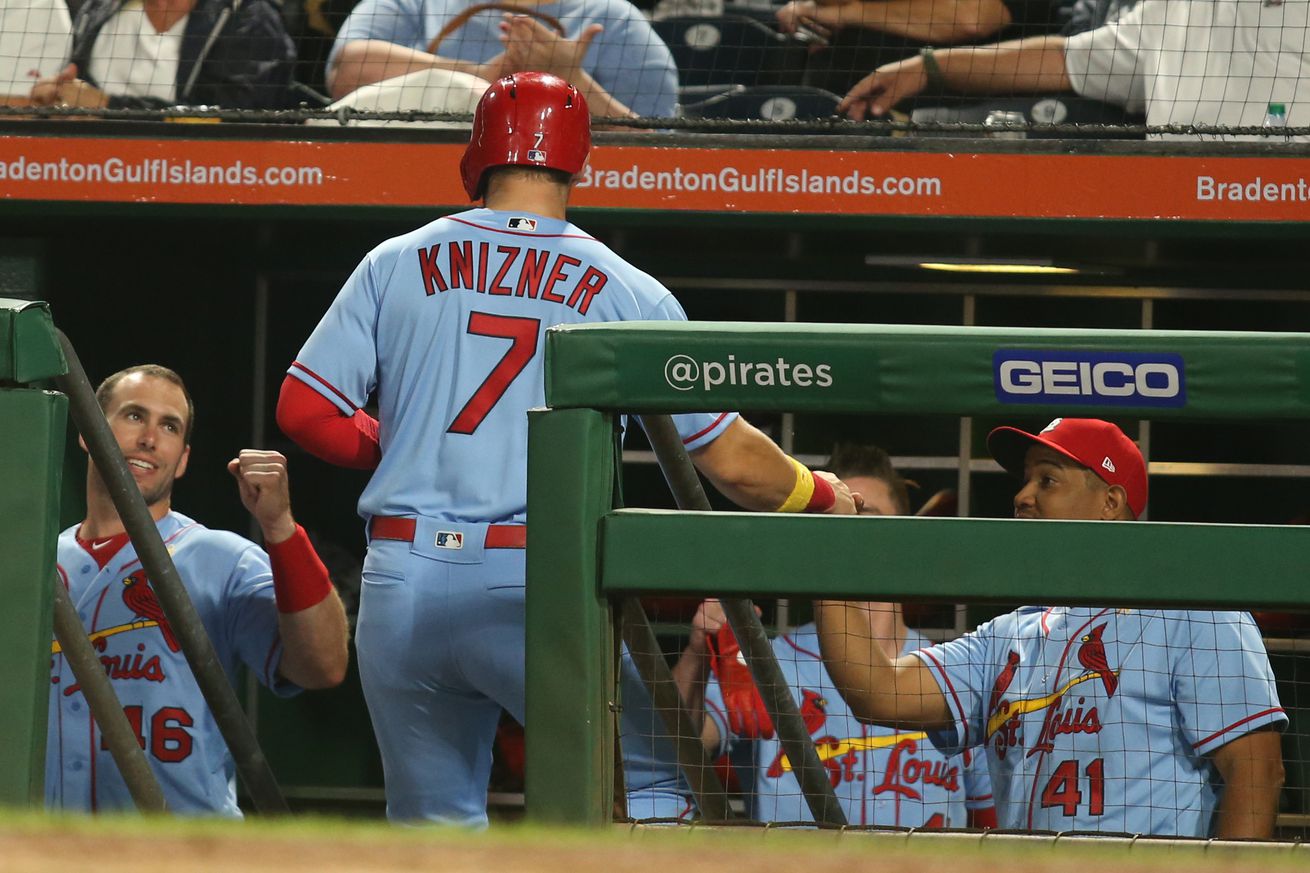 As Spring Training approaches, there is more and more chatter about Yadier Molina and his contract situation. The ageless wonder is on the final year of a three-year, $60 million contract that he signed in April of 2017. He will make $20 million this season before becoming a free agent in the offseason. However, it is nearly impossible that he will play for any other team in his career. He could retire at the end of the season, and depending on what happens in 2020 that could be the case. This seems unlikely, however, as he has already stated his desire to play beyond his current contract. Since this is the case, he will likely receive a 1-2 year extension from the Cardinals. This puts the front office and Andrew Knizner in a curious situation that presents many options moving forward.

Knizner will turn 25 at the beginning of February. He will likely spend the season at AAA Memphis while only suiting up for the big league club if Molina gets hurt. It feels like Knizner is ready for the MLB after he finished the 2018 season in Memphis and played most of 2019 with the AAA affiliate as well. He posted a solid .351 wOBA in the Pacific Coast League last season, but due to the extremely hitter friendly environment, he tallied just a 99 wRC+. This should not be a concern for him though as he had previously never finished a season with lower than a 114 wRC+. Overall, the former 7th round pick is a solid MLB ready, or near MLB ready, catching prospect. The only problem with him is Yadi’s longevity. If Molina decides to play for another two seasons after 2020, then the Cardinals will have to choose from one of three options – Find a way to give Knizner playing time, trade Knizner, or continue to use him as the AAA catcher/backup MLB catcher.

Option #1: Give him playing time

This seems to have a decent chance of happening. As Yadi continues to age, his production is likely to diminish while his body has a higher susceptibility to injury. A reasonable solution would be to play Molina and Knizner in a timeshare during the twilight of Molina’s career. This would allow the team to keep the nine time Gold Glove award winner happy, while also reducing the amount of wear and tear on his body throughout the season. This would also allow Knizner to get used to the big leagues by getting semi-consistent playing time in St. Louis. Depending on how the next season or two plays out, Knizner could even become the leader of the timeshare when Molina is in his age 40 season (if he receives a two year extension). Also working in favor for this idea is the success of Carson Kelly in Arizona. Kelly finished the 2019 season with 1.9 fWAR in just 365 plate appearances and his 108 wRC+ was ninth among catchers to receive at least 300 plate appearances. Kelly was shipped to the Diamondbacks in the Paul Goldschmidt trade. While serving as the centerpiece of the trade for Arizona, for the Cardinals, he was simply a casualty of Molina’s immortality. He is about seven months younger than Knizner but he likely would have sat behind Molina for upwards of six seasons despite being MLB-ready if he had stayed with the team. However, his success in Arizona could discourage the Cardinals from following a similar path with Knizner.

On the other hand, the Cardinals have already traded away one heir-apparent and they could be willing to do it again. Working against Knizner in this scenario is the catching talent that the Cardinals have throughout the farm system. The next highest ranked catching prospect is Ivan Herrera, a 19-year-old who reached high-A Palm Beach last season. In A-Affiliate Peoria, the right-handed hitter raked to the tune of a .378 wOBA and a 136 wRC+. He did not fare so well when he got his feet wet in Palm Beach at the end of the season, but he still posted a 102 wRC+ in 65 plate appearances due to the extremely pitcher friendly conditions of the Florida State League. If he begins 2020 at Palm Beach and plays well he could be the recipient of a midseason promotion to AA Springfield. Then, the following season could see him reach AAA Memphis. Ambitiously, he could be ready for regular MLB action by 2022. This depends on him continuing to perform well, but his recent history suggests that there is a good chance of this happening.

Another potential candidate to replace Molina after his retirement is Julio Rodriguez. The 22-year-old fared well in Palm Beach, recording a 115 wRC+ in 287 plate appearances. However, like Herrera, he struggled at the next level after receiving a late season promotion to AA Springfield. His 57 wRC+ in 47 plate appearances left a lot to be desired; however, it was a very small sample size. He will likely being next season as the starting catcher at Springfield and if he does well there, he could be looking at a promotion to Memphis, where the Cardinals would then have two good young catchers at Memphis. There is a chance that this could force the front office’s hand and lead to a trade of Knizner.

Another name to keep an eye on is Pedro Pages — the Cardinals sixth round draft pick in 2019. The 21-year-old tallied a .389 wOBA and 149 wRC+ in 214 plate appearances with Short Season State College and could establish his prospect status with another strong year. This would put him right behind Ivan Herrera, with a late 2022 of 2023 MLB ETA if he can sustain his success. Its a little early to be dreaming about a sixth round pick who just played his first season of professional ball, but he did have a very strong season, even if it was a little lucky (.355 BABIP).

With these options behind Knizner, a trade could seem appealing to John Mozeliak, Michael Girsch, and co.. If a trade were to happen, it could likely net the Cardinals a solid player in return, or they could look to package the catcher with another young player as in the structure of the Goldy deal.

Option #3: Keep him on the bench or in Memphis

This appears to be the team’s strategy for this season. Presumably, he would be the starter if Molina got hurt, but while this might be a fine solution for 2020, it seems to be a bad solution for 2021 and 2022. At that point, there will be no reason for Knizner to wallow in Memhis when he should be playing in the MLB. This option is the least desirable and, hopefully, the least likely as Knizner would be 27 years old by the time he would establish his position in the MLB (assuming a two year extension for Yadi).

One of the first two options appears to be the likeliest course of action for the Cardinals. If the team truly believes in the young catcher’s ability to be the long term solution, then they will likely follow option #1. However, the Cardinals have shown a willingness use Molina as a workhouse catcher despite his advanced age and if this continues to be the case, then Knizner will likely be following Carson Kelly’s path out of St. Louis. Only time will tell what the Cardinals will do, but there should be more clarity in the semi-near future when the Cardinals announce whether or not Molina will be given an extension.