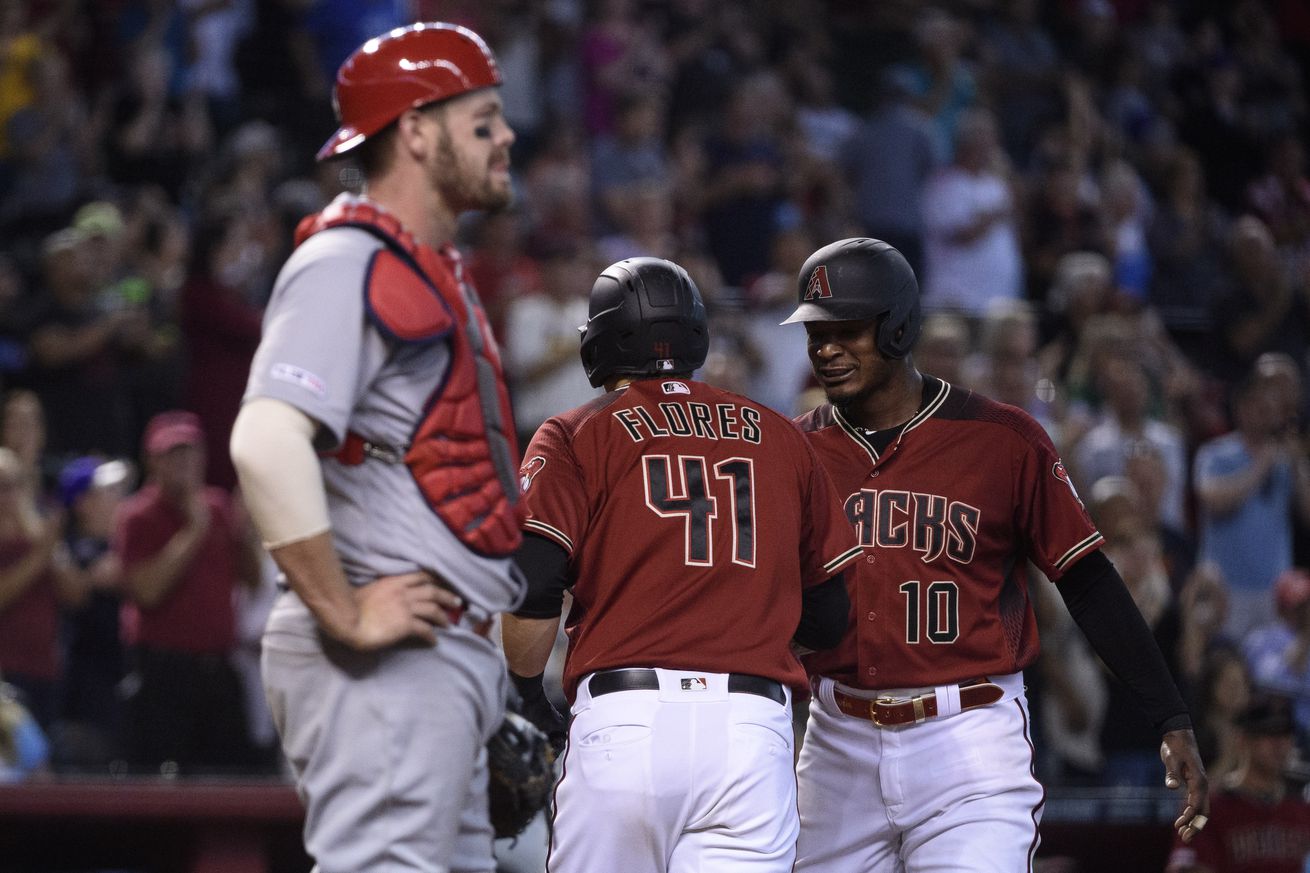 Baseball had a bad week. There were a few under-the-radar notes regarding Cardinal free agents you might have missed.

Matt Wieters will be signing back with #STLCards. 2M plus 1M incentives.

At Cardinals Winter Warmup, John Mozeliak said the #STLCards are “hopeful” to get a deal with catcher Matt Wieters done soon. Their interest in Wieters has been strong all winter.

This was also reported by Good and Mark Saxon.

I’m very distracted. The AFC Championship Game is tomorrow and I’ve been suffering as a Chiefs fan for almost as long as I’ve been a Cardinals fan. Today, I’ve got just enough non-Chiefs brain space available for a news & notes Cardinals article. If the Chiefs win tomorrow, well, sorry, but you’re looking at two weeks of this kind of material from me:

Got an article due for Viva El Birdos and I am about 95% Chiefs, 4% food/water, 1% Cardinals for the next few days. Topics I should write about today: Better OF arm: Mahomes or Rick Ankiel? Is Tyreek Hill faster than Vince Coleman? Genius battle: Tony LaRussa vs Andy Reid.

I apologize in advance. Ha… no, I don’t! Pat Freaking Mahomes throwing against an in-his-prime Ankiel? That’s something I would have wanted to see. (Yeah, Ankiel probably wins).

It was a huge and pretty awful week for Major League Baseball. A part of me is glad that the Astros and the Red Sox are getting their due. I have little sympathy for cheaters. I’m pretty sick about Carlos Beltran, though. He was a player I appreciated and respected and now this will forever be part of his legacy.

Wow… communicating the need to protect his jersey as he goes down the line. Unbelievable. https://t.co/i6HjhFtECl

This whole MLB trashcan banging, buzzer wearing, sign stealing, Trevor Bauer/Mike Fiers, Carlos Beltran’s neice, Twitter burner account debacle is just not good for the sport as a whole. If you don’t know what some of those references mean, good for you. You’re not missing anything. You don’t want to know. Can I join you in blissful unawareness? Combine all of that with the ongoing issue of minor league contraction, and, well, baseball seems like a floating dumpster fire that causes a train wreck.

So, does that mean we are now the St Louis Rockies and they are the Colorado Cardinals or am I reading that wrong? #rimshot #Iamhereallweek https://t.co/uFqCgaYu3t

The Cardinals have stayed safely out of the cheating scandals for now (sigh of relief), only to be sucked in by Nolan Arenado rumors that have only grown increasingly contradictory. It’s probably safe to say that the Cardinals and the Rockies have had on-going conversations about Arenado, but there are significant and persistent obstacles that will have to be cleared on both sides before anything happens. In my humble, uninformed, and totally gut-level opinion, the end of spring training or even the trade deadline are more likely times for a deal to take place. Deadlines create urgency. By then, the Cardinals’ resources and needs could be better defined and the Rockies could be more anxious.

Along with the Cardinals acquisition of Austin Dean, which stlcardsfan4 dealt with in detail here, there were a few other sneaky tidbits of information provided by Post-Dispatch beat writer Derrick Goold concerning Cardinals free agents Matt Wieters and Marcell Ozuna.

The Cardinals Have a Standing Offer to Matt Wieters

In his Monday chat, Goold was asked if the Cardinals were planning to offer Wieters a contract. The club cleared two roster spots in the Jose Martinez/Randy Arozarena trade and it seemed logical that one of those spots was earmarked for last year’s backup catcher to return. Goold made it clear that the club would like to bring Wieters back and they have a contract waiting for him if he chooses to accept it.

Why hasn’t he signed the Cardinals offer yet? The problem is one of playing time. With the Cardinals, Wieters has to contend not only with Yadier Molina’s iron-man mentality, but with the presence of backstop-of-the-future Andrew Knizner. Yadi will play as much as he wants. If he suffers an injury and misses significant time, the Cardinals will want to go young. Wieters’ 183 PA’s in 2019 were the second lowest of his career. With decent power numbers and health on his side, there’s a chance he could catch on with a team that has more paying time available for a 33-year-old backstop. If not, the Cards seem willing to wait on him.

Do the Cardinals even need Wieters? I’m not going to break down Wieter’s 2019 stats here. He’s a backup catcher. He can hit the occasional homer, put the right fingers down most of the time, and not let too much past him. I have low standards here, and Wieters more than meets them. I’m also not sure we have a full understanding of the versatility that the Cardinals gain with the 26-man roster. Carrying three catchers and using them more aggressively in substitutions is a possibility the club has surely considered, especially since Knizner is probably still a bat-first option. Wieter’s power from the backup catcher spot could also prove useful in selected spots. Really, the Cardinals want a reliable and trusted backup because they want Knizner to play as much as possible and that won’t happen if he’s stuck behind Molina. Goold notes that if Wieters does move on, the Cards would most likely throw Knizner and recently acquired non-roster catcher Oscar Hernandez into a competition. Knizner would spend some time starting at AAA regardless of how that competition plays out.

The Cardinals have a short-term, higher AAV deal on the table for Ozuna but he’s hoping for a little more.

Buried amidst the Arenado hype is Goold’s acknowledgement that Ozuna and the Cardinals are locked in a public staring contest, while perhaps playing footsie under the table. Ozuna has publicly stated his preference to return to the Cardinals, but he is willing to hold out as long as feasible to get as much out of the Cards as possible. Mozeliak seems to be taking the same approach, but is hoping to pay as little as possible. These conflicting realities have locked up the market for a player and team that seem destined for a reunion.

The news is that the Cardinals do have an offer on the table for Ozuna. Goold admits he does not have a sense of the value of this contract, but points to the Fowler deal as a starting point for a possible deal. Obviously, Ozuna wants to come in higher, with more money and/or years. He’s probably earned that. Fowler’s deal is several years old now and Fowler was 31 years old when he signed. The Cardinals, risk averse, are said to desire a shorter-term, even if that means paying a higher-than-expected annual value. If the market will allow them to retain Ozuna for, say, 3/$54M, they would be receiving a significant discount.

Josh Donaldson’s signing with the Twins might spark more movement in the market for free agent hitters. Ozuna also seems tied to comparable slugger Nicholas Castellanos, who also remains unsigned. Both players have significant power and defensive struggles. They should receive comparable deals, but it’s going to take one of them actually signing to set the market for the other. It’s a collective stalement: two comparable players, a small group of interested teams, and everyone wanting the best deal. This could extend into spring.

If you’re wondering about a pillow deal for Ozuna, John LaRue handled that here. Dexter Fowler signed a one-year deal with the Cubs on February 25th, 2016. This should be resolved by then. I still expect Ozuna to return.