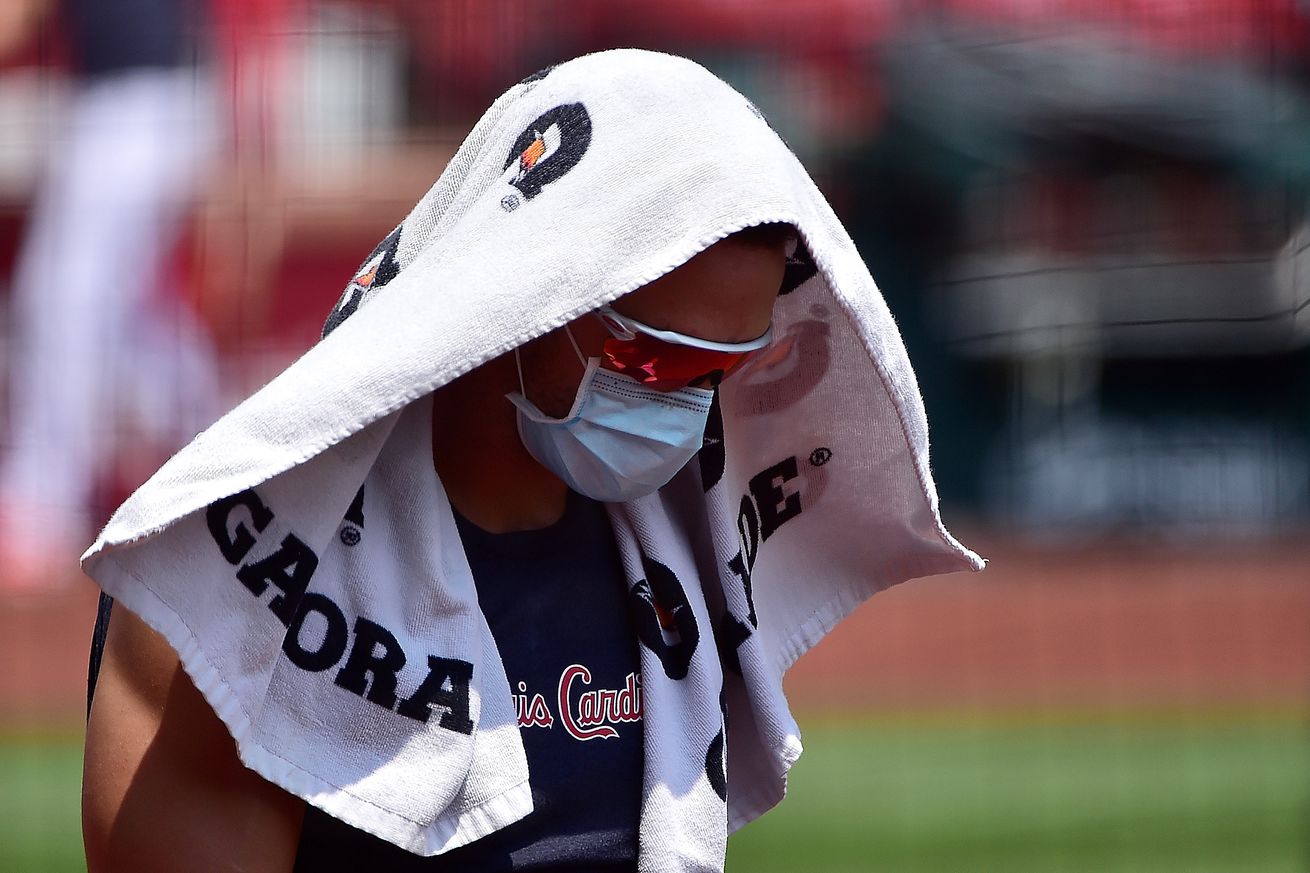 One weekend in, and it’s becoming apparent just how unprepared MLB was to resume play.

For all of our focus the past couple months on the economics of baseball and the 60-game season itself, it seems we forgot the reason Opening Day was delayed in the first place. There is an ongoing pandemic and we are doing a terrible job in our efforts to minimize said pandemic.

So it shouldn’t come as much of a surprise that COVID-19 outbreaks are trickling into Major League Baseball as well. I’ll refer you to Heather’s Hunt and Peck post from yesterday for more details, but to summarize:

If virus transmission becomes a concern for Team 1, they won’t be able to suit up for their next game against Team 2. And if Team 3 just played Team 1, their upcoming game against Team 4 will also be postponed. So one flareup causes at least four teams to have to press pause on their season, with the potential for more depending on who else Team 1 has recently been in contact with.

If MLB is truly doing its due diligence to keep players and staff safe, it’s not as simple as, say, pushing a game back a day. Per Harvard Medical School’s website, testing in the first few days after exposure frequently produces inaccurate results.

If you get the nasal/throat swab or saliva test, you will get a false negative test result:

100% of the time on the day you are exposed to the virus. (There are so few viral particles in your nose or saliva so soon after infection that the test cannot detect them.)

About 40% of the time if you are tested four days after exposure to the virus.

About 20% of the time if you develop symptoms and are tested three days after those symptoms started.

This possibility of a false negative test result is why anyone who has symptoms that could be due to COVID-19, or has been exposed to someone known to be infected, must isolate even if they test negative for coronavirus.

If you’re a member of the “iT’s No WoRsE tHaN tHe FlU” camp, I’m not going to waste anyone’s time rehashing the same reasons you’ve been hearing for months now as to why that logic is flawed. If hearing that Red Sox pitcher Eduardo Rodriguez developed complications at age 27 from COVID-19 that “can affect the heart’s ability to pump and causing rapid or abnormal heart rhythms” means nothing to you because he’s still alive, then I don’t think we’re going to agree on many things.

In an attempt to squeeze as much revenue out of 2020 as humanly possible, MLB is unsurprisingly choosing to punt away any hopes of proactivity. Look at what happened to the Marlins in their first series of the year. Especially as teams begin to travel more, does anyone genuinely believe the same fate isn’t in store for other clubs?

Rob Manfred said his proverbial line in the sand with regards to halting play is “a team losing a number of players that rendered it completely non-competitive.” All jokes about the Marlins not being competitive to begin with aside, if 14 positive cases isn’t enough, then what number is? Or would a similar outbreak amongst a team like the Yankees or Dodgers legitimately warrant a different response from the league? It’s also worth noting that even if you draw the line at, say, 20 cases, by the time you step in and act, it’s practically guaranteed that additional people beyond those 20 have already been and/or will be infected.

MLB weathered the Marlins COVID-19 storm season intact just 2 games lost. Either this will be the norm & the season zig zags on, pressures mounts with each team outbreak and the season is cancelled, or something more tragic occurs, a player dies & the plug is pullled immediately

We might have wanted to avoid admitting it, but MLB’s reopening plan was only going to hold up for so long. Absent a bubble like the National Women’s Soccer League, which recently completed a monthlong tournament without any cases, the odds of safely navigating a return to play were always going to be virtually zero. (And even the NWSL setup could have easily fallen through, as the Orlando Pride had to withdraw days before the tournament began after six players and four staff members tested positive.)

Personally, I have ethical qualms about asking people to subject themselves to unreasonable safety risks for my own entertainment. Be grateful and don’t take these games for granted because if the first week has been any indicator, the 2020 season might be a short-lived one.

(Postscript: be even more grateful for the millions of workers in oftentimes riskier environments who are receiving less pay and have less access to quality healthcare.)