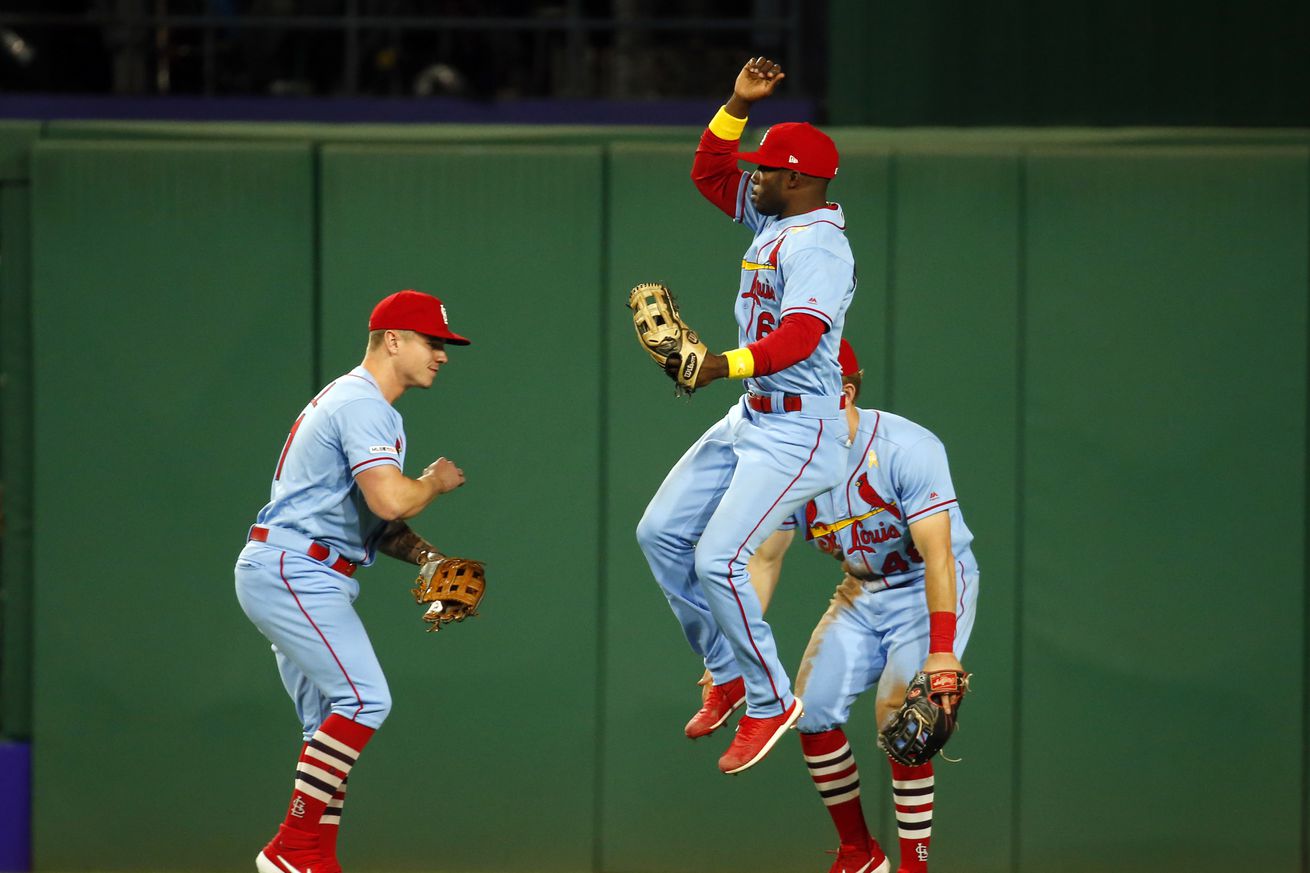 The Cardinals outfield is likely set. Steamer’s Depth Charts are harsh, but some fans are full of optimism.

If you didn’t hear the news already, Marcell Ozuna is now an Atlanta Brave. Its a move that surprised me, as I had all but convinced myself that he would have to settle for a one-year deal back with the Cards:

Wow… he got his pillow deal, but not with the Cardinals. Frankly, I am shocked. Cards only chance to improve offense now is Arenado and odds of that are still extremely low. https://t.co/lpmwEeo3HG

Turns out that Ozuna was able to just barely sneak above the Cardinals Qualifying Offer on a one-year deal. In doing so, he kicked his payday down another season and the Cardinals proved again how much they value their budget and their compensation picks.

No doubt these picks are valuable. The list of comp picks who have impacted the Cards’ MLB roster is impressive. Still, they only exist because a team lost talent and quality production.

Such is the case with Ozuna, who was never a superstar for the Cardinals, but was still very productive (5.4 fWAR) over two seasons. That is a significant amount of production to lose. The club maintains that it expects existing players to improve and young players to step up. Many fans echo this optimism. Current projections, though, are not swayed by hope, and they paint a bleak picture of the Cardinals outfield potential.

Using the Steamer projection system as a base, Fangraphs’ Depth Charts takes statistical forecasts for players and recalculates them based upon likely playing time. This allows fans to look at the Cardinals 2020 projected outfield and get a relatively accurate idea of how it compares to actual production in previous seasons or outlooks for the rest of the league.

We did this earlier with the starting rotation. Let’s do the same for the outfield. We’ll start with Depth Charts current projections and tweak from there.

The Cardinals combined outfield fWAR from Depth Charts is just 4.6, down from 6.9 in 2019. 4.6 outfield fWAR would project to rank 22nd in baseball. That’s bad. It’s worse when you view the Cardinals OF fWAR in comparison to the NL teams above them:

Cards projected for 4.6 fWAR in the OF, 22nd in baseball. fWAR projections for NL teams ahead of them:

Even the most optimistic projections for the Cards OF leaves them far behind.

There is a lot to digest here. Let’s take it in pieces.

Are the Depth Charts Projections Reasonable?

When I started this conversation on Twitter, a few fans immediately jumped on the projections for Tyler O’Neill and Tommy Edman. Seems fair. Edman had 3.2 fWAR last year and at first glance, it looks like Depth Charts has dropped him all the way to .6. That’s not accurate. While Depth Charts believe Edman will primarily be a left-fielder, they also give him 182 PA’s in the infielder for an additional .7 fWAR. Edman’s total projection is .274/.322/.420 with 1.3 fWAR in 505 PA’s. Why is his fWAR so much lower than ‘19? It’s pretty simple. First, they expect Edman to have a significant power drop, which I think is very fair based on his MiLB profile and skillset. Second, the replacement level baseline for left fielders is higher than it is for infielders. Tommy Edman at 3b is a lot more valuable than Tommy Edman in LF, and Depth Charts illustrates that difference well.

Despite giving him significantly more PA’s compared to his career, they have his fWAR total dropping. The small dip in wOBA compared to his career and the fact that he’s not projected to receive any centerfield time are the primary causes. Depth Charts views O’Neill as a starter in left/right fielder, but with fatal flaws, little defensive upside, and power that doesn’t do enough to separate him from others at his position around the league.

Those two case studies provide an overview of how Depth Charts work. They are notoriously conservative in the projections, and though they might seem off in individual cases, there is usually a logic guiding each player projection. They also prove relatively accurate over the course of time.

Is there a better outfield arrangement?

Lets play around a little with the projections and be optimistic. First, projections for Edman and O’Neill might be too conservative. Let’s give O’Neill a .5 WAR bump and Edman .2 because of his lower PA totals. We started at 4.6 and are now at 5.2.

Bader is projected for a slight bounce back at the plate. Steamer believes his defense will normalize from eye-popping to just elite. Let’s disagree and bump him to right at 2.0 WAR. We can now add +.3 WAR to the overall projection – 5.5 fWAR.

Fowler, meanwhile, is projected to see time in both RF and CF, combining for 637 PA’s and .9 fWAR. That WAR total is just a standard age deduction applied to his 2019 season stats, so it’s fair. The PA total, though, is way too high. Edman, O’Neill, and Bader all have a higher WAR/PA rate than Fowler, so it’s probably safe to cut Fowler out of CF entirely and bump the others up. That adds another +.5 if I squint while rounding up – 6.0 fWAR.

Then there are the kids. Steamer thinks that Lane Thomas and Dylan Carlson are interchangeable, but it gives more playing time to Thomas since he’s already on the 40-man roster. We have to ignore fWAR, since they really aren’t given much playing time, and consider projected slash lines:
Carlson – .252/.318/.416 for a .311 wOBA
Thomas – .244/.308/.420 for a .308 wOBA

Steamer projects the two rookie outfielders (Thomas might have used up his eligibility) to be … rookie outfielders. Yes, young players sometimes come up and immediately blow up, like Tommy Edman or Stephen Piscotty. More often, young players come up and immediately struggle, like prospects Carlson compares favorably too:
Oscar Taveras – .239/.278/.312 for a .265 wOBA
Colby Rasmus – .251/.307/.407 for a .311 wOBA

Can we add fWAR for Thomas and Carlson? To do so means taking plate appearances away elsewhere. We’ve already cut Fowler’s PA’s. To find more, we would have to cut Bader, O’Neill or Edman, each of which are projected to a similar fWAR/PA as Thomas and Carlson. We could redistribute PA’s, but the production looks like a wash. We’re stuck at 6 fWAR.

What Depth Charts is telling us here is that multiple unpredictable things are going to have to happen for the Cardinals to have a chance to make up the ground they have lost with Ozuna’s departure. Optimism gets us closer, but still not all the way. The issue isn’t that the Cardinals don’t have intriguing players. It’s that left field is where the playing time is and the replacement level baseline for LF is high enough that it takes really good players to push past it.

Ozuna’s 2.8/2.6 fWAR over the last two seasons really aren’t that impressive, but they do rank 12th and 9th among LF’ers during that time. O’Nell just can’t project as a top-10 left fielder with his current profile. Edman, an infielder, and Thomas, a centerfielder, have solid offensive potential for their positions, but they lose that value when they’re move down the defensive spectrum. Carlson, meanwhile, has the most potential, but his production is a total mystery.

That’s where I turn back to the list of NL outfields ahead of the Cardinals. Our optimistic adjustments gained the Cardinals 1.4 fWAR – 6.0. We could probably go wild and say they add another 1 WAR, bumping the club all the way up to 7, just better than ‘19. Woohoo! Optimism!

The Cardinals would still be ninth in the league in outfield fWAR.

To truly compete with the best NL outfields, the Cardinals would have to double their current projections for outfield fWAR. 4.6 fWAR to 9.2. That’s just silly and it still only pushes the Cardinals barely past Atlanta, who now sits at 9 fWAR. You know… because they just signed Marcell Ozuna. (Sigh.)

Optimism is good and healthy for fans. This is all about a game, after all. It should be fun. Don’t let spreadsheets steal your joy. At the same time, don’t get sucked in by wild speculation that’s not based on some kind of statistical reality. Baring a pixie-dust miracle, the Cardinals outfield isn’t going to be very good. But, the club’s defense should be. And the infield ain’t bad. And the pitching staff has a lot of potential. The Cardinals can still be a good team despite the loss of Ozuna.

Ravelo is projected to be a replacement level bat – 0 fWAR – in 47 PA’s according to Steamer.