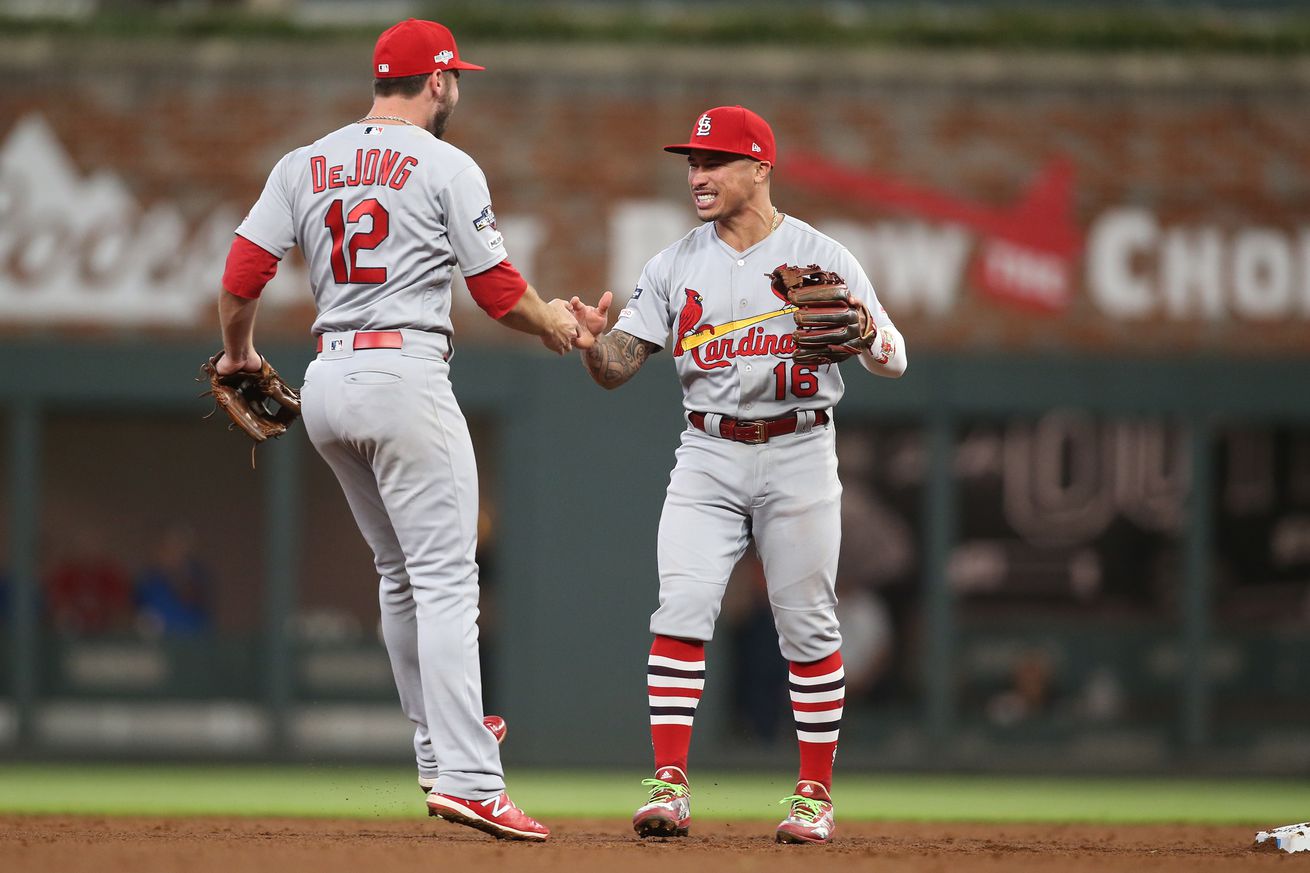 In 2018 the Cardinals defense left a lot to be desired. It lead the MLB in errors with 133 and generally played poorly for the entire season. However, DRS and UZR looked more kindly upon the Cardinals in 2018, as the team finished just outside the top 10 in each metric. Depending on the stats used, the Cardinals defense was among the worst in the MLB, or it was simply average. However, this changed in 2019 when the Cardinals finished the season third in DRS, second in UZR, and first in infield OAA. Despite the vast difference between the two seasons, Kolten Wong and Paul DeJong have formed the backbone of the defense and have been the best defensive middle infield combination for the last two seasons.

Last season, Kolten Wong led all second basemen in DRS with 14 and finished just behind Yolmer Sanchez of the White Sox with 4.9 UZR/150. This led to him earning the Gold Glove award at second base in the NL. Paul DeJong also had a great season with the glove. He finished fourth in DRS with 14 and third in UZR/150 with 9.6. Unlike Wong, he did not win the Gold Glove for the NL, but he was a finalist.

No other team can boast have a second baseman and a shortstop in the top five of each of those metrics. However, this is nothing new for the Cardinals as the Wong/DeJong duo was just as good if not better in 2018. Wong tallied 19 DRS and a UZR/150 of 17.6 in that year, while DeJong finished with a season that was nearly identical to his 2019 with 14 DRS and 9.3 UZR/150. Clearly this is a great defensive combination up the middle and it has created a lot of value for the Cardinals.

Additionally it seems that this combination will continue to do that in the forseeable future as John Mozeliak and Michael Girsch made sure to offer both players contract extensions that now look like bargains. Kolten Wong has two years remaining on his extension that began in 2016. He will make $10.25 million next season and $12.5 million in 2021 (club option). This is a bargain for a player that has posted 2.8 WAR and 3.7 WAR in the last two seasons, respectively.

Paul DeJong is on an even better contract. The shortstop will make just $1.5 million dollars next season, $4 million in 2021, $6 million in 2022, and $9 million in 2023. After that he has a pair of club options worth $12.5 million and $15 million to cover the next two seasons. This is a bargain for a shortstop who finished the season 4.1 WAR and an all star game appearance. The Cardinals front office has made some questionable decisions by offering expensive extensions to players like Matt Carpenter, Yadier Molina, and Paul Goldschmidt in recent years. The Molina extension makes sense as there is no way that the Cardinals would let him play for any other team. The Goldschmidt extension is a little more controversial, and that decision was essentially made the moment that the Cardinals traded for him, so if there is a problem then it is with the trade. And the Carpenter extension is just simply not good. His production last season did not warrant the salary that he is receiving.

However, the Wong and DeJong extensions are two that the front office got right. Because their salaries are relatively small, they will give the Cardinals lots of surplus value. Even if Kolten Wong’s bat regresses next season, he should still be close to a 3 WAR player with his strong defense and Paul DeJong’s offense can be expected to see some positive regression, so his 4.1 WAR this season looks sustainable in the future. Clearly this strategy of extensions has the potential to backfire or to succeed; it simply depends on the player. The one thing that the Molina, Carpenter, and Goldschmidt extensions have in common is that all players were well over 30 years of age when they signed. On the other hand Wong and Dejong were in their mid-20s when they were extended. While it might be risky to give long term contract to relatively unproven players, the youth of these players allowed the overall value of the extension to be depressed, giving it the potential for a lot more surplus value.

It appears that the Cardinals will have the best defensive middle infield for the next few seasons, and it will come at a relatively inexpensive price. This is a major advantage for the Cardinals and is an example of the potential success of extending young players early in their careers.