Matty Alou had the perfect audience to appreciate a daring dash around the bases. 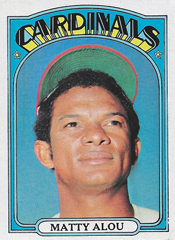 Fifty years ago, on Aug. 7, 1971, Alou used skill, imagination and nerve to produce the winning run for the Cardinals in a victory versus the Dodgers at St. Louis.

With the score tied at 2-2, Alou batted with one out and none on in the 10th inning. He reached base on a bunt single, then made a fearless sprint from first to home while the Dodgers botched every attempt to catch him.

Alou’s aggressive baserunning was reminiscent of Enos Slaughter, who scored the winning run for the Cardinals on a mad scramble from first to home in Game 7 of the 1946 World Series.

Twenty-five years later, Slaughter and several of his contemporaries were in St. Louis for a reunion of the 1946 World Series teams and were at the ballpark to witness Alou’s performance.

After sweeping the Giants, the Cardinals (62-50) were seven games behind the division-leading Pirates (69-43) as they entered a three-game series with the Dodgers at Busch Memorial Stadium.

The opening game, played on a Saturday night, featured left-handed starting pitchers Claude Osteen of the Dodgers and Steve Carlton of the Cardinals. The Dodgers went ahead, 2-0, with a pair of runs in the sixth, but the Cardinals tied the score in the seventh on a RBI apiece by Jim Beauchamp and Jerry McNertney.

When the game moved to the bottom of the 10th, Pete Mikkelsen, a former Cardinal, came in to pitch. He struck out the first batter, Julian Javier, before Alou, batting .325, stepped to the plate.

Batting left-handed, Alou executed a drag bunt between first base and the mound. Another former Cardinal, first baseman Dick Allen, fielded the ball, but Alou eluded his tag attempt and reached base safely.

Cleanup batter Joe Torre was up next, but Mikkelsen was focused on Alou. He gathered second baseman Jim Lefebvre and shortstop Maury Wills for a conference between the mound and second to discuss whether to try a pitchout on the first pitch.

As the group gabbed, Alou realized no one had called timeout, so he bolted for second. “I thought I could beat them to the base,” Alou told the Los Angeles Times.

Dodgers manager Walter Alston said, “There’s an umpire at every base. All you’ve got to do is call time.”

Though caught by surprise, Lefebvre got to the bag before Alou did. “The consensus among the Dodgers was Alou would have been out by 10 feet if Mikkelsen had made a good throw,” the St. Louis Post-Dispatch reported.

Instead, Mikkelsen hurried a high toss to Lefebvre. As Lefebvre reached for it, the ball went off the top of his glove and into center field. Alou kept running and headed to third on Mikkelsen’s error.

“I went to third because I know on the AstroTurf the ball would go a long way,” Alou explained to the Los Angeles Times.

However, Alston noted, “The ball only went 15 feet.”

Lefebvre got to the ball, but failed to field it cleanly while trying to keep an eye on Alou.

“When I saw Lefebvre couldn’t pick the ball up, I thought I could score,” Alou told the Los Angeles Times.

Alou sped for the plate and arrived ahead of Lefebvre’s throw to catcher Joe Ferguson, giving the Cardinals a 3-2 triumph. Boxscore

“I’ve never seen anything like that,” Alston told the Post-Dispatch, “and I never want to see it again.”

Dom DiMaggio, center fielder for the Red Sox team that opposed the Cardinals in the 1946 World Series, said, “They were running fools then, like Alou now.”

In baseball, though, a bum one day can be a hero the next. Sure enough, the day after his role in the Dodgers’ lapse, Lefebvre got redemption, hitting a three-run home run against Jerry Reuss and helping the Dodgers recover for a 4-2 victory. Boxscore