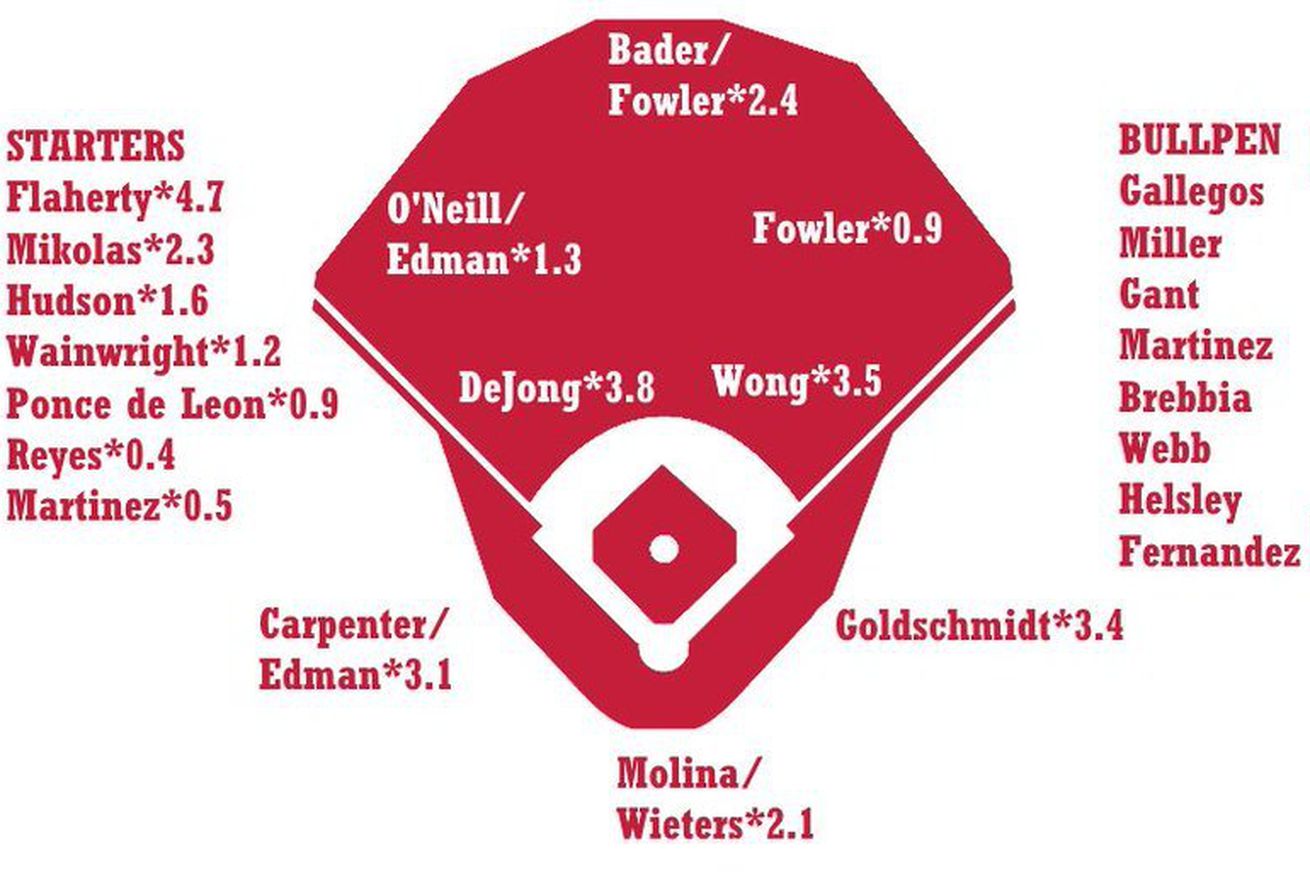 ZiPS projections were published yesterday at Fangraphs and they’re full of interesting and encouraging notes. Like… Jack Flaherty is Roger Clemens!

First, I want to say a word of THANK YOU to Dan Szymborski (@DSzymborski) for releasing the Cardinals ZiPS today. When the Ozuna trade went down and I started work on Thursday’s Depth Charts outfield projection article, I asked Dan and VEB alum Craig Edwards (@craigjedwards) when the Cards ZiPS projections would be released at Fangraphs. Silence followed, which was absolutely what I expected. Still, here we are, two days later, with Cardinals projections in hand! Maybe Dan already had the Cardinals in the hopper, or maybe he tweaked the release order to accommodate us. Regardless, we have them just at the right time and I for one am thankful for all the work that goes into ZiPS.

ZiPS is a computer-based projection system that looks at four years worth of major and minor league stats to forecast a baseline (midpoint) projection for the future. Dan Szymborski introduces ZiPS here. If you’re curious about the inner workings of ZiPS, its best to read about it in his own words. Basically every conceivable Statcast and standard metric that Szymborski can gather is included in his algorithm. He weighs their predictive value using some kind of ramen-fueled voodoo, and every winter he births his own prognosticating progeny.

Here’s the basics from Szymborski: “ZiPS engages in two fundamental tasks when making a projection: establishing a baseline for a player, and estimating what their future looks like using that baseline.”

Take Jack Flaherty as an example. ZiPS thinks that Flaherty has the best chance of having around a 3.13 era with a 3.12 FIP, and providing 4.4 fWAR in 190 innings. That’s Flaherty’s baseline, based upon two seasons in the majors and some minor league data. Could he beat those numbers? Yeah, sure! But, he could also come in below those numbers.

That’s the thing about projections. A few individual forecasts might prove off, but the whole forecast — for a league season or even a team — is going to fall pretty close.

What does ZiPS say about the 2020 Cardinals?

The best place to start here is with the full projections. You can find them here: Cardinals ZiPS link. Fair warning, there’s a TON of information in that link and it’s really easy to get bogged down in the details. I try to avoid stressing over things like HR totals, innings, or RBIs. Focus instead on a few manageable lines of information.

For ZiPS hitters, I look at BA/OBP/SLUG slash line, OPS+, and WAR.

Why do this? Because it looks like ZiPS is saying that Angel Rondon is going to start 25 games for the Cardinals in 2020. He’s not. ZiPS could not care less about playing time or organizational depth charts. Instead, it’s saying “this is a midpoint projection for Angel Rondon IF he started 25 games.” Generally speaking, the rates are what matter, not the totals.

You really should look at the data at the link above. But, since I know you probably won’t, here’s a sample of the Cardinals hitting and pitching ZiPS. I went down to the lowest likely regular in both hitting (Yairo Munoz) and pitching (Tyler Webb).

There should be some things that jump out at you right away. For example:

1. Jack Flaherty’s closest comp is Roger Clemens. That’s so incredible that I’m going to geek out about it for the rest of the year. John LaRue did a really nice article on Flaherty’s projections earlier and, while his Peavy comp is great, Clemens is one of the best pitchers of all time. Think about what ZiPS is telling you here.

2. Dejong and Wong are not projected for any noteworthy decline. This kind of projection is noteworthy because of … MIDPOINTS! Wong didn’t have a career year in 2019. Instead, Wong finally fulfilled the potential that his stats have been pointing to for several years and ZiPS is confident it will now continue. DeJong, likewise, now has a baseline as an almost All-Star caliber player. That’s not optimism. That’s his base. This is great news for Cards fans.

3. Carpenter is back and Edman is going to be solid. A .240/.354/.444 slash and 2.6 fWAR from Carpenter is really just fine. I’ll take that next season, especially since Edman is also projected for 2.6 WAR and spectacular defense. Playing time issues will probably mean neither hits those marks, but the Cards can be comfortable with solid good production from both players.

4. Carlos Martinez looks good. While the computer doesn’t know whether Martinez will be in the pen or the rotation, it knows that Martinez hasn’t received starters innings in the last few years. So, that’s what it gives us — a WAR total based on limited innings. But, the rate stats are good, as is the ERA/FIP. Martinez, if healthy, would be the second best starter on the club.

5. KK’s projection has dropped since it was first released. ZiPS has tweaked KK’s projection from his initial signing. He’s seeing an increase in ERA/FIP. I’m less optimstic about him than I was earlier, but that’s ok since all reports on Martinez’s health are positive and Hudson and Mikolas both look fine here.

6. Dylan Carlson and Harrison Bader are the best in the outfield. The Bader projection is great news. 2.5 fWAR as a baseline from him in ‘20 is encouraging. Carlson also looks good. I know that 1.7 WAR doesn’t seem like much, but remember, ZiPS is projecting him based on a tiny amount of PA’s AA or above. Don’t get caught up in the numbers. ZiPS already thinks Carlson’s skillset profiles as the second best option in the OF, based largely on A and AA performance. That’s extremely noteworthy.

7. Bullpen looks solid. ZiPS pretty much likes everyone in the pen from the right side and it’s pretty optimistic about Andrew Miller, too. Lots of solid performances with Gallegos emerging as the likely closer.

How will the ZiPS projections play out?

If you want (and who wouldn’t want to?) you could go through the projections in the link and revise this depth chart to your own fancy, searching for the playing time scenario that creates the most production. You can probably already guess that means more time for Carlson in the outfield and less for Fowler. Finding some way to get Edman and Carpenter on the field at the same time would be helpful. Martinez needs an innings revision and KK should probably have a shot at challenging Wainwight.

If you want even more fun, take those scenarios and start building a ZiPS-centered everyday lineup. Post your thoughts in chat or take your views to the general public by @’ing me on Twitter – @JPHill_Cards. I’ll be working through some of those scenarios both here and there, and we’ll revisit the projections often through spring and into the season.

The more you know: