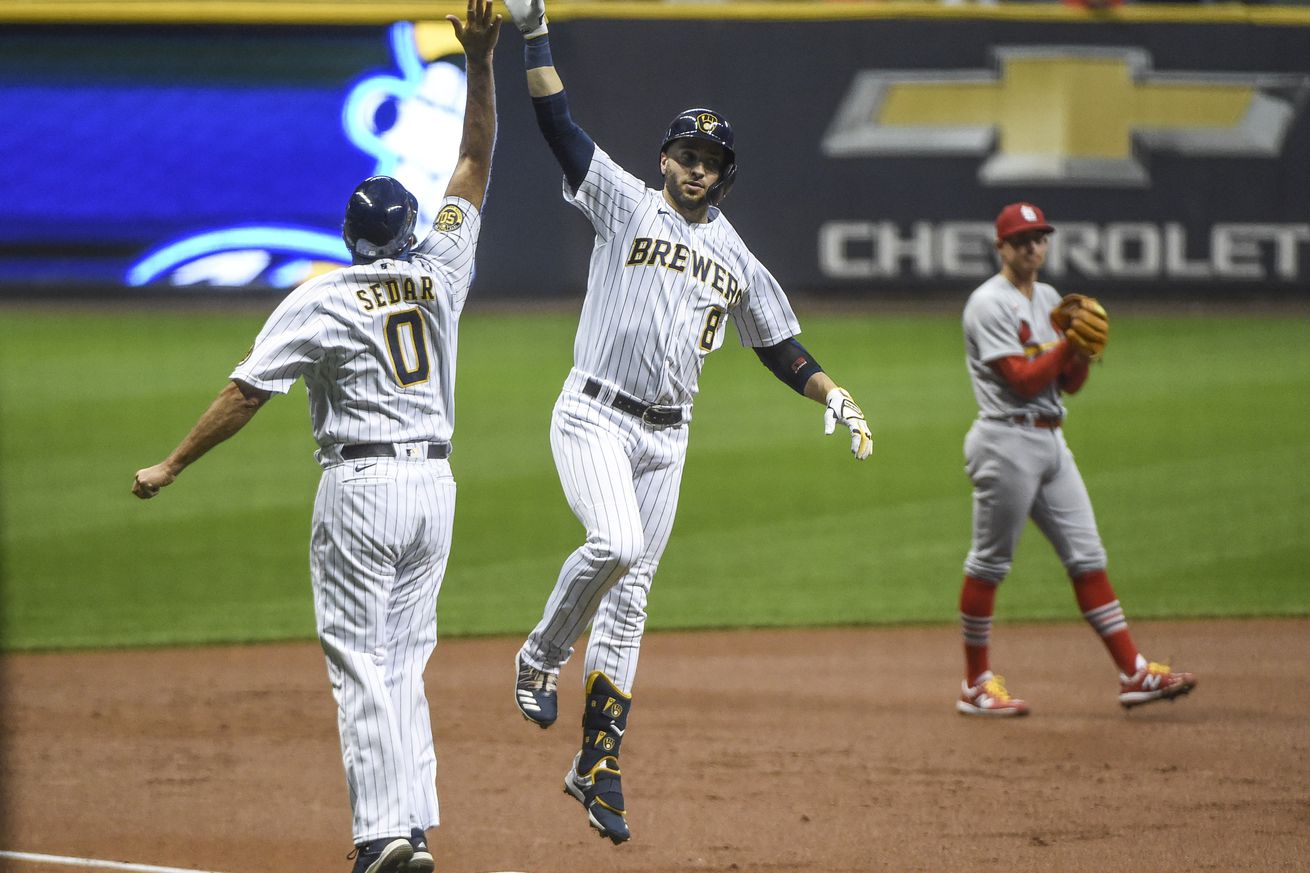 The positive things about Game 2 were (1) that the game only lasted about 2 hours, which undoubtedly made it easier for the club to get to Pittsburgh, their next destination; and (2) the Cards only had to use one reliever. Other than that, it was a rough Game 2 for the club. Manager Mike Shildt served a one-game suspension (and was fined an undisclosed amount) for his role in the bench-clearing incident last night. That left bench coach Oliver Marmol to manage the club, but there wasn’t much he could have done today other than to make sure he left Oviedo out there for a significant amount of time. The Cards only got two hits all night—an infield single off of the pitcher’s glove by Tommy Edman and a bloop base hit by Paul DeJong that would have been a lazy popout to the 2nd baseman if the Brewers had been in a normal defense. Meanwhile, starter Johan Oviedo got pounded. I’m not trying to jump on the young man, as he’s 22 years old, has never pitched in AAA, would not be here under normal circumstances, and was just coming off an 8-day quarantine. He certainly did the club a valuable service just by soaking up some innings. But in this game, he allowed fifteen balls in play, to go along with two home runs. Fifteen out of those seventeen balls were hit at an exit velocity of 97 mph or more. Eleven were hit 100 mph or harder. He put himself behind the 8-ball early in the first inning, his command of his pitches was inconsistent, and the Cards didn’t have enough with the stick to come back.

Lefty Brent Suter took the mound for the Brewers. Tommy Edman grounded an 0-1 outside change to short to lead off the game. Paul DeJong blooped a 1-1 low-and-away changeup to right-center for a base hit. If the Brewers hadn’t been in an extreme shift to the left, the 2nd baseman would have been right in position to make the grab. After Paul Goldschmidt walked on 5 pitches, Brad Miller tapped a low 1-2 curve to the shortstop Orlando Arcia into the shift to the right of the bag. There was no one to flip the ball to at 2nd base, so he had to hustle over and tag Goldschmidt out trying to slide into 2nd base. DeJong moved to 3rd base on the play, and with runners at the corners, Tyler O’Neill flied an outside 2-2 fastball deep to right, but Ryan Braun caught it at the track against the wall to end the inning. Johan Oviedo took the mound for the Cards on 8 days of rest and hit Avisail Garcia in the left shoulder blade with a first-pitch fastball. After Christian Yelich worked a 3-2 walk, Ryan Braun smoked an 0-1 thigh-high fastball over the left-center field wall for a 3-run HR to give the Brewers a 3-0 lead.

Keston Hiura walked on 5 pitches. Daniel Vogelbach popped an 0-1 inside slider foul near the 3rd base coach’s box. The Cards were in an extreme shift, with the 3rd baseman Miller playing by the 2nd base bag. Both Wieters and Miller ran for it. Miller called Wieters off at the last second, but overran the ball, and missed with his glove. Miller was charged with an error on the play for failing to catch it. Oviedo’s next pitch was an outside fastball that Wieters just flat dropped. It bounced off the outside of his mitt, and got away behind him for a passed ball to move Hiura to 2nd base. Vogelbach grounded the 1-2 low fastball to 2nd base to move Hiura to 3rd. Jedd Gyorko drove a high hanging 0-2 slider deep to left-center, but O’Neill caught it with his back against the wall. Hiura scored on the Sac Fly to make it 4-0 Brewers. Orlando Arcia struck out swinging at a 2-2 center-cut fastball to end the inning.

Rangel Ravelo worked a 3-2 walk to lead off the top of the 2nd. Matt Carpenter put down a surprise bunt to the left of the mound, but not far enough, as the pitcher Suter threw him out. Ravelo went to 2nd on the play. It looked like Carpenter was trying to bunt for a base hit, so the scorer did not credit him with a sacrifice, instead scoring the play a 1-3 groundout. Harrison Bader flied a low 2-0 fastball to Braun in right, deep enough to allow Ravelo to tag up and advance to 3rd. With 2 out, Wieters lined an inside fastball to the right side, but Gyorko was playing off the line and grabbed it to end the inning. Luis Urias flied a 1-0 inside fastball to left to lead off the bottom of the 2nd. Jacob Nottingham grounded a 1-2 center-cut fastball deep into the hole on the left side of the infield. DeJong raced over and made a jump throw across his body. The ball bounced once right to Goldschmidt at 1st base to beat Nottingham by a step for a great play.

Garcia sliced an 0-1 inside fastball to deep right field towards the corner. Ravelo tried to make what looked like an unnecessary sliding grab, but couldn’t squeeze the ball into his glove. The ball dropped for a double. It turned out not to matter, as Yelich struck out chasing a low-and-away 2-2 curve to end the inning.

To lead off the top of the 3rd, Edman tapped a low 1-2 fastball to the mound. The pitcher Suter tried to make a jumping grab after his follow-through, but the ball deflected to Arcia at short. He tried to make a barehanded grab and throw, but Edman beat it out easily for an infield hit. DeJong chased an elevated 2-2 85 mph fastball and struck out. Goldschmidt chased an 0-2 change about a foot outside and low to strike out. Brad Miller struck out looking at a 3-2 fastball that looked like it was several inches inside to end the inning. He took a much closer 1-2 outside fastball that was called for a ball. Braun ripped a center-cut 1-2 fastball to the left-center field gap that rolled to the wall for a double to lead off the bottom of the 3rd. Oviedo then clipped Hiura with an up-and-in 0-1 fastball on the bill of his helmet. After a brief pause in play, Vogelbach lined a first-pitch low-and-in fastball right to Edman at 2nd base. He tried to double Braun off of 2nd base, but Braun got back in time. He would have had a better chance to get Hiura at 1st, but Goldschmidt wasn’t close enough to the bag for Edman to throw it. Gyorko grounded a 2-2 outside slider to the left side. Miller made a great stop on the ball before it got to the hole and fired to 2nd for an inning-ending 5-4-3 double play.

Suter was done in this Brewers’ bullpen game after 52 pitches, and righty Freddy Peralta came out to pitch the top of the 4th. O’Neill grounded a hanging 1-2 curve to short to start the inning. Ravelo chased an up-and-in 1-2 fastball to shallow right. Carpenter flied an up-and-in 3-2 fastball to right to end the inning. Arcia lined an outside 0-1 slider to right for a base hit to lead off the bottom of the 4th. Urias flied an inside slider to O’Neill in shallow left on the foul line. Nottingham laced a 1-1 low-and-in fastball for a grounder to the right side. Edman made a great diving stop to his left, then threw to 2nd from his knees. Nottingham just barely beat DeJong’s throw to 1st, and all the Cards could get was the 4-6 force. Garcia struck out swinging at a high 0-2 96 mph fastball to end the inning.

Bader struck out swinging at a low-and-away 1-2 slider to lead off the top of the 5th. Wieters couldn’t hold up his swing and weakly waved at an 0-2 curve in the dirt to strike out. Edman struck out swinging at a 2-2 curve low-and-in and out of the zone to end the inning. Yelich flied a 2-0 low-and-in slider to O’Neill in left just shy of the track to lead off the bottom of the 5th. After Oviedo hit Braun on the left tricep with a first-pitch fastball, the umpires huddled together and decided to warn both dugouts. Hiura lined a low 3-2 slider to deep left, but O’Neill caught it at the track. Vogelbach lined a hanging 1-1 curve for a base hit to right to move Braun to 2nd. But the runners were stranded, as Gyorko struck out swinging at a good 1-2 slider low-and-away to end the inning.

Righty Devin Williams came out to pitch the top of the 6th for the Brewers. DeJong flied a center-cut 96 mph fastball to deep left-center, but Paulie didn’t get it all, as it stalled in front of the track for Garcia. Goldschmidt struck out looking at a high-and-outside filthy 1-2 changeup. Brad Miller struck out swinging at an outside 99 mph fastball to end the inning. Arcia smoked an 0-1 inside fastball through the right side for a base hit to lead off the bottom of the 6th. Urias struck out swinging at an inside 2-2 fastball. Nottingham then lined a high hanging 0-2 slider over the left field wall for a 2-run HR to give the Brewers a 6-0 lead.

That was it for Oviedo after 94 pitches, and Seth Elledge came out for the Cards. Garcia chopped a hanging 0-1 slider to short. After Yelich worked a 3-2 walk, Braun grounded a low 1-0 sinker to short to end the inning.

Righty submarine pitcher Eric Yardley came out to pitch for the Brewers in the top of the 7th. Tyrone Taylor came out to play RF in the #3 spot to replace Braun. O’Neill grounded a 1-1 center-cut sinker to short. Ravelo struck out chasing a 2-2 low-and-in sinker. Justin Williams pinch hit for Carpenter and sliced a 1-1 inside sinker to Yelich in left to end the game.

The Cards travel to Pittsburgh tomorrow for 5 games in 4 days, and close out the season with 13 games in 11 days without a day off, including 2 more doubleheaders…Dexter Fowler might return to the club next week. He returned to baseball activies at Busch Stadium today…The Reds beat the Pirates 1-0. Luis Castillo pitched 7 innings of scoreless ball with 1 walk and 10 strikeouts. Three singles in the 5th, including an RBI base hit from Shogo Akiyama were all the Reds needed. That victory gave the Reds a 4-game series sweep and put them into a tie with the Cards for 2nd in the NL Central division in terms of Games Back. In terms of winning percentage, which might be used to determine playoff spots, Cincinnati is ahead of the Cardinals (.490 to .489). The Reds have a day off tomorrow, then have a 3-game series with the White Sox at home starting on Friday…The Cubs pulled another one out tonight. Last night after Francisco Lindor’s 2-run shot tied the game 5-5 in the 9th, the Cubs walked it off after Indians reliever Nick Wittgren hit 2 straight guys…Tonight, in the top of the 10th, after the lead off man walked, the Indians tried to bunt to advance the runners, but Mike Freeman bunted into a force out at 3rd base. Jason Adam then retired the rest of the side in order. In the bottom of the 10th, Anthony Rizzo was walked intentionally to load the bases after Kris Bryant got a leadoff base hit. Indians reliever Phil Maton struck out both Willson Contreras and Kyle Schwarber and almost escaped. But Javier Baez chased an 0-2 slider at least a foot outside and poked it into left for a walkoff base hit. The Cubs also have a day off tomorrow before a 3-game series at home against the Twins starting on Friday.