In a bid to win an extra $30 in a baseball version of a track and field meet, Cardinals third baseman Sparky Adams paid a high price, costing himself playing time in the World Series. 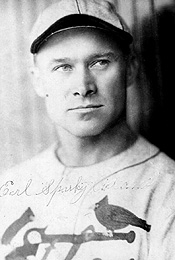 Ninety years ago, on Sept. 20, 1931, Adams injured an ankle in a base-circling contest before a game against the Dodgers at St. Louis.

Adams, who led the 1931 Cardinals in hits, runs and doubles, sat out the final six games of the regular season and also was sidelined for five of the seven games of the World Series.

“My size, or lack of it, has been a tremendous handicap since boyhood,” Adams told The Sporting News. “Ever since I can remember, it has been, ‘You’re too small for this and you’re not big enough for that.’ Naturally, I resented it, and my resentment made me more determined to do the things I wanted to do.”

Nicknamed “Rabbit” because he was small and fast, Adams developed into a prospect and was signed by Cardinals scout Pop Kelchner.

“The manager was disappointed when he saw me,” Adams told The Sporting News. “He asked if I’d brought my nursing bottle. One of the regulars said he would show me to my room and bed. He took me to a linen closet in the hotel and opened a drawer for me.”

Adams opened some narrow minds with his performance on the field. Playing shortstop, he produced 157 hits, including 33 doubles, in 119 games for Danville. He batted .326 with 98 RBI and 20 stolen bases.

According to The Sporting News, Cardinals manager Branch Rickey was watching a group of rookies at spring training camp at Orange, Texas, in 1921 when he spotted a person he thought was a boy playing shortstop.

“Tell that bat boy to get out of the infield,” Rickey said to starting shortstop Doc Lavan.

Adams came over to Rickey, who said, “Do you think you’re a shortstop?”

Rickey said, “I’m afraid you’re too small. Not enough weight. You’d never stand up under a season of play. You’d be skin and bones.”

Adams remained in camp and was put through a series of rigorous daily drills. His weight dropped from 158 pounds to 137, The Sporting News reported.

“Young fellow, I knew you were too small for the majors leagues,” Rickey told him.

Adams was 28 when he made his big-league debut with the Cubs on Sept. 18, 1922, against the Dodgers at Brooklyn. Starting at second base, he singled twice versus future Hall of Famer Dazzy Vance. Boxscore

Three years later, when Rabbit Maranville became Cubs manager in July 1925, he met with Adams and, according to The Sporting News, said to him, “Say, Rabbit, we can’t have two Rabbits on this club … You’re a regular little sparkplug. So, from now on, you’re Sparky.”

In November 1927, the Cubs sent Adams to the Pirates in a swap involving another future Hall of Famer, Kiki Cuyler. Two years later, the Cardinals purchased Adams’ contract from the Pirates.

“He’s a darned pest at the plate,” Reds pitcher Red Adams told The Sporting News. “I’d rather pitch to Hack Wilson or Rogers Hornsby any time.”

After losing four of six games to the Athletics in the 1930 World Series, the Cardinals came back and won the pennant again in 1931, clinching on Sept. 16.

Four days later, before a Sunday home game against the Dodgers, the teams staged a track and field meet. The promotional event featured a couple of 75-yard dashes, a bunt-and-run contest, a base-circling competition and a throwing contest, the St. Louis Globe-Democrat reported.

The players were competing for prizes totaling $240 cash, three radios and an automobile tire.

Adams, 37, won the bunt-and-run contest. After bunting a pitch, he scooted from the batter’s box to first base in 3.4 seconds, the St. Louis Post-Dispatch noted.

Trying to win $30 more in the base-circling competition, Adams was rounding first when he pulled up lame with a severely sprained left ankle.

Rookie Ray Cunningham started at third in place of Adams that day. The Cardinals’ catcher was their manager, Gabby Street, 10 days away from turning 49 and playing in a big-league game for the first time in 19 years. Boxscore

Andy High, a veteran utility player, started at third for the Cardinals in the final five games of the regular season.

Adams, the smallest Cardinal, led the 1931 club in hits (178), runs (97) and doubles (a league-best 48). He also had the best fielding percentage among National League third basemen.

The Cardinals hoped his ankle would heal in time for him to play in the World Series, a rematch against the Athletics, but Andy High started at third in Game 1 on Oct. 1.

Another veteran backup, Jake Flowers, was the starter at third in Game 2.

With Lefty Grove pitching for the Athletics in Game 3, Adams, who hit .337 against left-handers during the season, returned to the lineup.

In the fifth, Adams fielded Bing Miller’s sharp grounder, but “limped painfully” after making the force play at second and was replaced the next inning by Flowers. Boxscore

Flowers started at third in Game 4 and Adams was back for Game 5. He led off the game with a single versus Waite Hoyt but couldn’t continue. Boxscore

Adams was done for the Series. After Flowers started Game 6, High was in the lineup for Game 7. High had three hits and scored twice, helping the Cardinals to a 4-2 victory and the championship. Boxscore

Adams was slowed by a knee injury in 1932. In May 1933, he was traded to the Reds in a deal that brought shortstop Leo Durocher to the Cardinals.