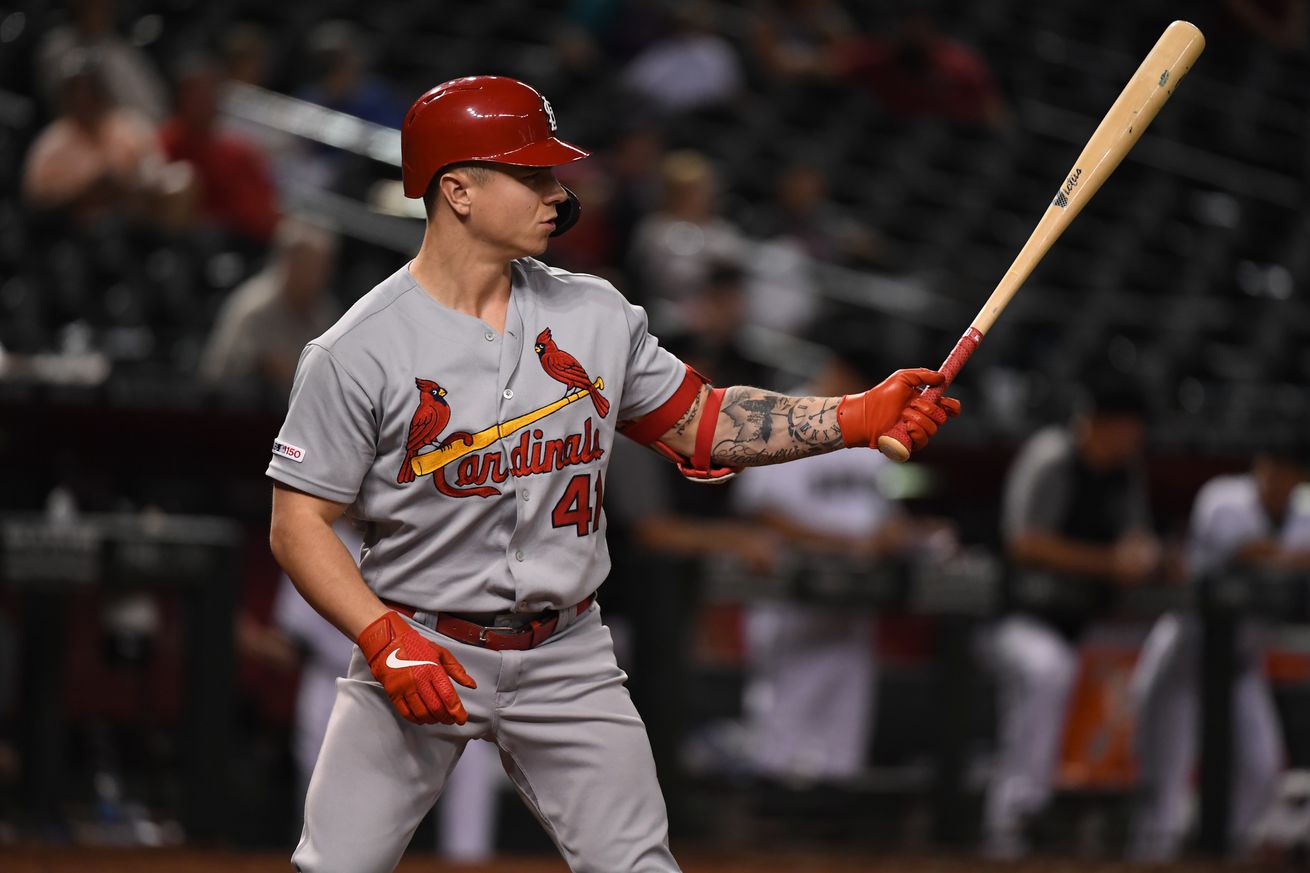 Last year, to celebrate the uncertainties that come with a new year, I posted 11 questions that I expected to be answered throughout last season. Some of them were answered swiftly. The Cardinals did not sign Bryce Harper. We did not see a healthy Alex Reyes. The Cardinals did not sign another starter. Carlos Martinez did not return to normal and in fact moved to the bullpen. And Jordan Hicks’ stats did end up matching his stuff for the time he was healthy.

Some questions took a bit longer. Jedd Gyorko was traded, eventually. Jose Martinez never did get traded. (Glad I do not need to ask that question again frankly) . Andrew Miller was not the Andrew Miller of old. And some questions… could apply to 2019 as well! “What is Going to Happen with Fowler?” “How much playing time will Tyler O’Neill get?” And one question never needed to be answered: “Will the Cardinals be willing to move Wainwright to the bullpen?”

So I’ll pose a similar barrage of questions for this new Cardinals season.

#1 Will the Cardinals trade for Nolan Arenado?

In other words, the “Will the Cardinals sign Bryce Harper?” of 2019. I have an answer to this question. I was pretty sure the Cardinals weren’t going to sign Harper, but a part of me believed it was possible. A part of me that felt the need to say “but” after saying I didn’t think it was going to happen. If you had to assign a percentage of my certainty towards how much I thought it was going to happen, it wasn’t high. But it’s about five times higher than how I feel about the likelihood of the Cards getting Arenado.

But that’s been the big story lately and will likely be the big story until he’s traded to the Texas Rangers. So the question is here. I’m not going to lie. I’m already over it. And really it all stems to me just straight up not believing the rumors. Derrick Goold and Jeff Passan threw cold water over the previous rumors, and Bill Dewitt said he didn’t think he could add more payroll. I thought it was done. And then Arenado complained. I’m still not seeing it.

#2 Will Kwang-Hyun Kim start or relieve?

If I haven’t expressed this opinion before, I’ll put it on the record here. I want him starting. The Cardinals essentially have six starters going into the spring training – which is the smart thing to do! Something the Cardinals didn’t do last year. And they got extremely lucky. But this year they’re more prepared. And the operative belief is that Kim is only starting if someone ahead of him goes down.

Well, I want him to start over Dakota Hudson. And I want Hudson in AAA, still starting, for when someone does go down. Based off how MLB rotations usually work, this is not a death sentence. It means Hudson might throw 140 innings instead of 175. This decision looks absolutely bizarre if you only look at ERA as a stat, but he was a 1 WAR starter for a reason. Anyway, I don’t mind Hudson as a starter, I just think he’s clearly the worst option of the six.

#3 Will Carlos Martinez be back to normal?

Yes, this is the exact question I posed last year, except it arguably applies even more this year. Will he back to normal – starting? If you hadn’t gathered from the above question, I want him to start and I want him to be one of the five starting pitchers. I do not want him in the bullpen. As a starter, he was a 3 WAR starter. Maybe those days are gone, but I think he stands a hell of a lot better shot of being a 3 WAR starter than Hudson.

#4 Will Tyler O’Neill break out?

The Cardinals appear set to not sign another starter, so I’m not specifically worried about Tyler O’Neill’s playing time. I feel he will play. If he doesn’t perform, I’m sure he won’t play as much, but I do believe he will get a real shot. So unlike last year, playing time for him isn’t the question: performance is.

In the few limited times he’s gotten consistent, regular playing time at the major league level, he’s performed. Why his numbers aren’t better is simply because he’s not very good as a guy who gets sporadic playing time, mostly pinch-hitting. Which makes an intuitive type of sense given the type of hitter he is. But now, with the deck of outfielders in front of him cleared, he has to perform.

#5 Will Matt Carpenter bounce back?

Any time I talk about Matt Carpenter, especially in relation to 2020, I feel obliged to point out his 2019 season wasn’t as bad as you think. I don’t know why that is. But I think it has something to do with Dexter Fowler’s 2018. Fowler was worth -1.1 fWAR in 2018 and then Carpenter had a very down year in comparison to what we’re used to, so I think some fans sort of blend the two seasons as similar. They were not. Carpenter was a full two wins better than Fowler was in his bad year. (If Carpenter makes a similar jump as Fowler did, he’ll be a 3.8 fWAR player in 2020)

And I’m not saying it was good either. It was below average. 1.2 fWAR in 492 PAs is not starter material. But we’re talking about a guy who had six straight seasons of at least 3.2 fWAR before 2019. And a certain segment of the fanbase – I don’t know if it’s the majority but it’s sizable – has written him off for 2020, which seems absurd to me. I’m not saying he’ll reach 3.2 fWAR in 2020, but there’s quite a bit of wiggle room to still be quite valuable without necessarily needing to be that good. And that is the question. Will he bounce back?

Honestly, most of this list could just be boiled down to “Will the Cards offense bounce back?” if I wanted it to be that simple. I’m not going to ask the question, because I don’t really think the upside will be that impactful to the 2020 team, but you could ask if Yadier Molina’s bat will bounce back too. Anyway, I’m phrasing this question differently, because it feels a bit weird to treat it as if Goldschmidt had some bad season in 2019, because he didn’t.

But he wasn’t “classic Goldschmidt.” In fact, the only reason 2019 wasn’t his worst season was because in his first full season in the bigs, he got about 100 less PAs than he did last year. And his wRC+ of 116 was his worst, even including his 48 game sample in his rookie season. That’s right. Goldschmidt was a worse hitter last year than he’s ever been.

Of course, that also gives you reason for optimism. When a player declines so unexpectedly, you naturally expect them to reach a middle ground of what they were and what they just did. And I don’t know if Goldschmidt will do that – the middle ground is a 131 wRC+, which is higher than his Steamer projection. But a Goldschmidt with a 131 wRC+ is about a 4.7 fWAR player, which would be kind of huge for the 2020 Cardinals.

#7 When will we see Dylan Carlson in the big leagues?

Well this is certainly timely. Baseball America released it’s top 100 and Carlson found his way into their top ten. And when a top 10 prospect will start the season in AAA after having a small sample of games in AAA the year before, the question isn’t will they come up, it’s when. Injuries and/or performance at the MLB level will dictate the issue most likely more than Carlson’s performance (though he can certainly do his best to force the issue and get called up earlier than planned).

#8 Will Dakota Hudson improve as a pitcher?

I think most of the people who read this site understand what I mean when I ask if he will improve. But I should clarify nonetheless. I do not mean will his ERA improve. It would be bonkers to ask that question. Hudson having worse than a 3.35 ERA is probably the safest bet in baseball. When I say improve, I mean will he have a better K/BB ratio? I suppose that’s really the only question. The groundballs are elite. He had a high HR/FB% but I’m not sure there’s reason to believe that’s sustainable. The benchmark for improvement as far as I’m concerned is 4.55. Will he improve upon a 4.55 FIP (which was his xFIP – neutral luck on home runs)?

This is an obligatory question. I myself? I don’t care who the closer is. I mean I’ll care if they name Andrew Miller or Tyler Webb the closer, but I don’t think that’s going to happen. Who is the closer is less important than making sure the best pitchers get the highest leverage innings. Which last year was Giovanny Gallegos. Maybe he’s the closer. Maybe John Gant’s the closer. Both were relied on last year for more than one inning, which typically doesn’t happen to the closer. Maybe it’s Ryan Helsley. Maybe it’s Alex Reyes! If Martinez is in the rotation, it’s completely up for grabs.

This is definitely the last year I will ask this question, but he remains an X factor that nobody is really factoring into the plans – and rightfully so of course. But theoretically, he would be a big game changer. He will probably be in the bullpen. The Cardinals have six starters competing for five spots and Alex Reyes is simply too much of an unknown, health-wise, to even pretend he’s a seventh guy competing for those five spots. We’re already squeezing out Hudson here in my perfect world, there’s nobody else to squeeze out. But you never know. Baseball seasons rarely work out how we plan them.

#11 Which young outfielder will separate themselves from the pack?

This is a wholly different question than the O’Neill and Carlson one. O’Neill, by virtue of his overall AAA numbers, has separated himself already. Carlson, by virtue of being a top 30 or so prospect in baseball (depending on the source), has separated himself as well. And of course, Harrison Bader has a better MLB track record than the rest combined.

The rest? Free for all. Lane Thomas performed well in a very, very limited sample of MLB games and kind of disappointed in AAA. Justin Williams crushed AAA for the first time, but it wasn’t in a large enough sample to outweigh his previous mediocre performance in AAA. And Austin Dean has extremely underwhelming MLB numbers despite also crushing AAA, which would be more encouraging if he wasn’t already 26-years-old.

One of these three (if not more) is going to make a difference at the MLB level. It’s just a question as to who. Thomas has the best shot as I believe he’s going to make the MLB roster right away, but that doesn’t necessarily mean he’s the guaranteed right answer to this question. After all, Justin Williams is a prime swing change candidate and Austin Dean might be too.

As we get nearer to Opening Day, some of these questions will be answered, but some of them won’t be known until the end of the year. And I’m excited to get the chance to find out the answers.