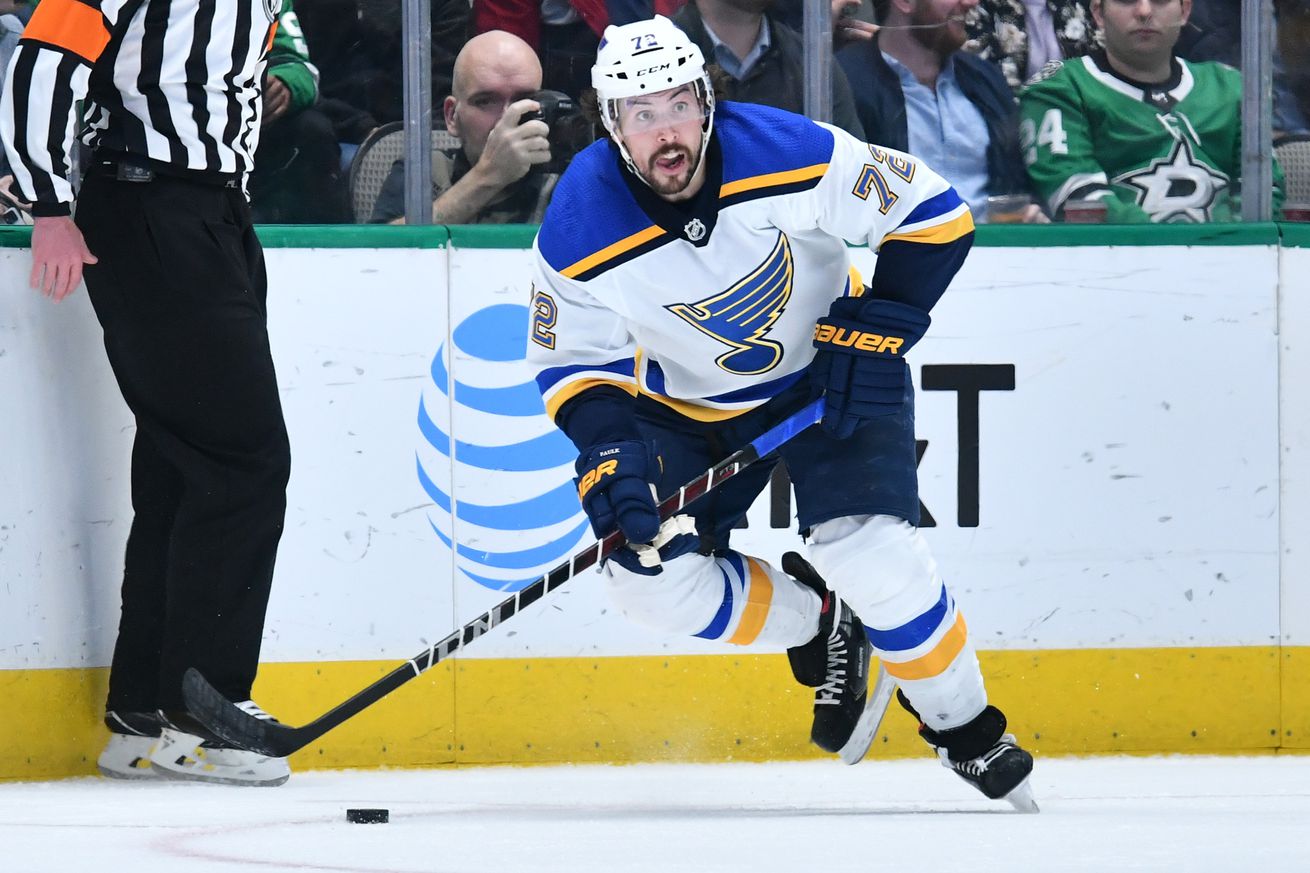 A huge thanks goes to Earl Schwartz (@EarlSchwartz27) for the CBA help. You can find his work here.

The contract situation surrounding the Blues is… bleak. Every fan knows about the situation, with plenty of cases to be made, hypothetical scenarios, and stark realizations flying around. But there’s one scenario that, while very, very unlikely to happen, might be a bit exciting to ponder.

Justin Faulk was brought to St. Louis ahead of the 2019-20 season. In return, the Blues sent Joel Edmundson and high-end prospect Dominik Bokk to the Carolina Hurricanes. It was a questionable deal from the second it occurred but when Faulk signed a contract extension immediately after… many started to question the Blues’ sanity.

Faulk was inked to a seven-year contract extension with an annual cap hit of $6.5 million. To add insult to injury, he was also granted a full no-trade-clause for the first five years and a modified-no-trade-clause in the latter two. Before he even played a game in a Blues jersey, Faulk was guaranteed at least eight years in St. Louis.

And in response, Faulk rewarded St. Louis with the worst season of his career. By far.

In terms of base stats, Faulk set a career-low in goals (five), assists (11), and points (16); excluding the 2012-13 year when he scored 15 points in only 38 games. He also set career-lows in shots, shooting percentage, hits, blocks, average ice time… and plenty of other tallies. It was a bad year.

At the age of 27-years-old, when most players are hitting their peak, Faulk hit rock bottom. This is only emphasized by his advanced stats which, shocker, were again among the worst of his career: with a 2.14 GF/60 and a 2.51 GA/60. While his expected stats were a bit brighter (xGF/60 of 2.36; xGA/60 of 2.2) they don’t completely cover his bases.

There’s plenty more to say. In terms of GAR, he ranked in the 11 percentile among defensemen… 11.5 percent to be exact. This was just worse than Edmundson and ranked Faulk in the same breath as players like Jonathan Ericsson, Derek Forbort, and Tim Heed. He was… bad.

Now for the fun part. While there is a glimmer of hope, showing that Faulk might be able to bounce back, it’s small. So, buying him out of his future contract extension could be the best plan of action.

And it’d be incredibly worthwhile for a Blues team that wants to re-sign Alex Pietrangelo (and Vince Dunn??). The long-term effects of the buyout are best shown using CapFriendly’s buyout calculator. For the sake of example in this article, the hypothetical buyout will take place on July 15, 2020.

Well, thanks to a few fine details with Carolina in the trade, the Blues are only accountable for 86 percent of the resulting cap hit. That’s part of the good news. The bad part is that the Blues would be paying for the buyout until the end of the 2033-34 season… a while to say the least.

But buyouts have been changed since the 2012-13 lockout. Prior to then, teams would back-load contracts or add unnecessary years onto a player’s deal (say, well after they’d retired) in an effort to lessen the penalty of a buyout.

Now, the league has built a system to punish this. The new procedure for a buyout is to take 2⁄3 of the player’s salary and spread it out over two-times the length of the deal. Then, each year’s cap hit is determined by taking the player’s cap hit, plus the money gained by the buyout, and subtracting it from the player’s salary that year. This can create some strange scenarios, as touched on terrifically here.

Well, thanks to Armstrong’s front-loading of Faulk’s deal, the Blues would actually GAIN money over the next two seasons in the case of a buyout. That’s right, they’d not only lose Faulk’s $6.5 million cap hit, they’d gain an additional $286,207 until the 2022-23 campaign. This would give them nearly $6.89 million in cap space to play with: plenty of money to not only deal with Pietrangelo and Dunn this summer but also Jaden Schwartz next summer.

It’d be an incredible boost and very-nearly fixes the Blues cap worries – although not entirely. But this is a wacky intricacy that would buy the Blues plenty of breathing room… at least for the time being.

The cap hit would strike in the 2023-24 season, when the Blues would have to pay out $2.42 million in cap space. They’d then pay only $658k the following year, over $3.3 million for the next three, and then $1.86 million for the next seven years. The full break-down will be below, with the Blues cap-hit each year being listed on the second-most right-hand column:

Is It Worth It?

This question isn’t very hard to answer on the surface. The Blues would still be paying $26 million to a player that wasn’t playing for them in this scenario, even if they save a total of $19.5 million in the grand-scheme ($32.48M saved from 2020 to 2027 – $13M paid from 2027 to 2034). The three years of over $3 million cap hit would be insufferable and severely limit the Blues’ ability to confidently sign players like Ryan O’Reilly, Vladimir Tarasenko, and Jordan Binnington, to only mention the pricey deals.

But at the same time, the deal would allow the Blues to only make a few moves to re-sign both Pietrangelo and Dunn. Things would be incredibly tight for years but at the same time, they’d save a large chunk of change in cap hit: $19.46 million. But that’s looking at the bright side. Paying so much money to have a player not play for St. Louis is ludicrous. Not only is the buyout completely nonsensical, it’s likely not worth it. But seeing how it’d affect the Blues contract situation over the next two seasons, thanks to strange caveats and lucrative inclusions, is very exciting.

Thanks again to Earl Schwartz, CapFriendly, and Evolving Hockey.