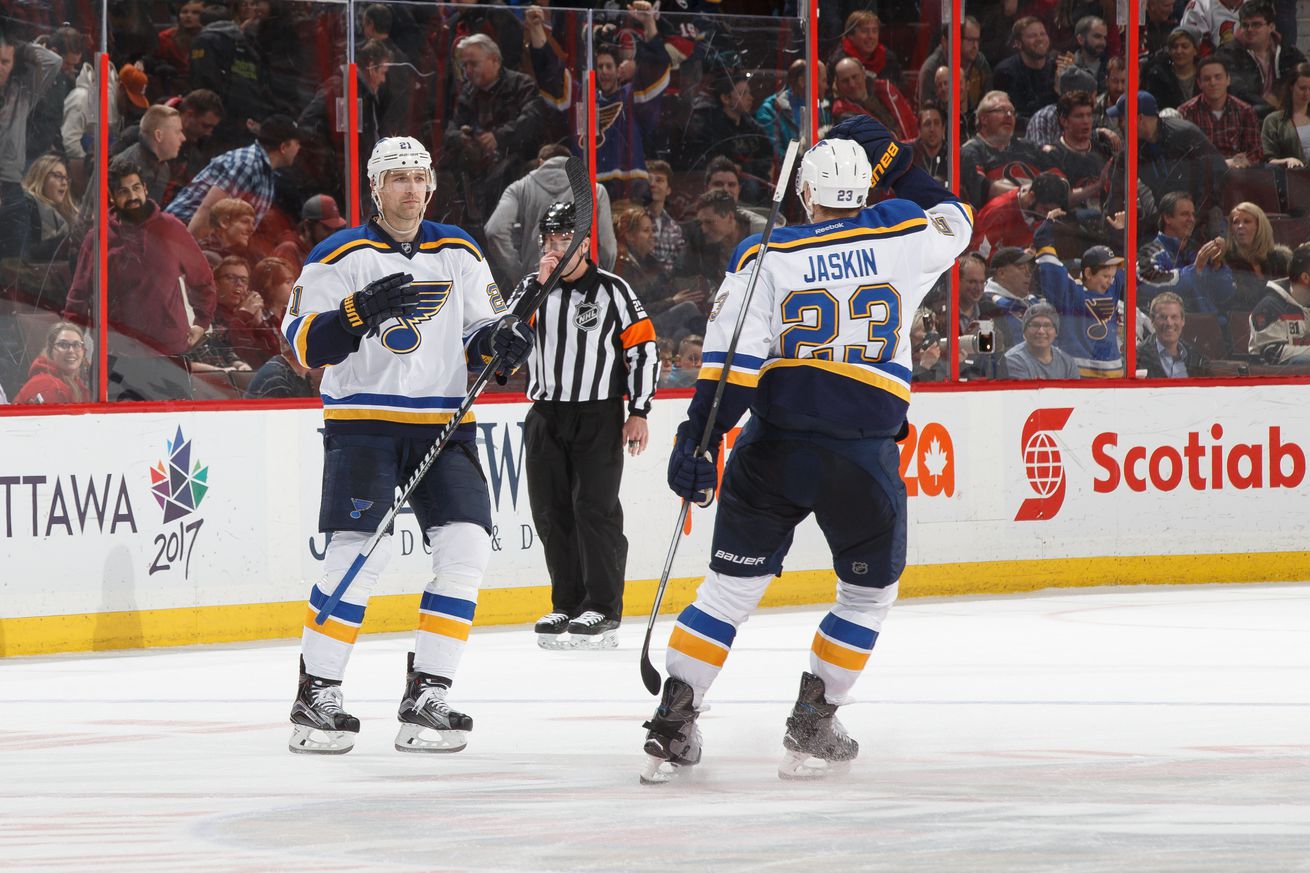 Until last season, the Blues bottom-six was a notorious cycle of poorly misused names.

The St. Louis Blues have one of the best teams in the league this year. Alex Pietrangelo’s Norris-worthy season, and soon-to-be Vezina winner Jordan Binnington, have helped propel the team to the league’s elite. What’s truly set them apart, though, is their stellar depth. Players like Ivan Barbashev, Oskar Sundqvist, and the dazzling Robert Thomas have been the true difference-makers. Their added oomph was what truly won the Stanley Cup for the Blues and their breakout this year is what’s going to give the Blues a chance at another one.

Yet, the Blues bottom-six didn’t always boast as much talent as it has these past two seasons. For most of the decade, it was merely a holding cell for players who were too well-known, or on certain contracts that didn’t allow them to go to the AHL. At least, that’s how it’s seemed on the surface. Digging deeper, there seems to have been a tremendous amount of wasted talent stuck on the Blues third and fourth lines over the course of the past decade.

Just gonna say – Dmitrij Jaškin never got a fair shake in the NHL. He was a very misunderstood player I think. pic.twitter.com/AVrfH0zgyS

The graphs are reminiscent of a strong top-six forward. While they show a clear league-average-at-best offensive ability, the huge spikes in both xGA/60 (expected goals-against per-60) and CA/60 (Corsi-against per-60) make one thing clear. Jaskin may have struggled to appear on the scoresheet but he boasted a truly elite ability in the defensive end.

The Dive Into the Numbers

Diving into the numbers more, Jaskin’s defensive prowess becomes even more apparent. In his rookie season, the 2014-15 year, he ranks ninth among any Blues season in both EVD and xGAA. At a per-60 basis, both of these stats still rank Jaskin among the top-10 (0/401 xGAA/60, 0.218 EVD/60). His 2015-16 season also ranks in the top-10 for EVD/60, which is Evolving Hockey’s defensive evaluation of their goals-above-replacement statistic.

These are a lot of numbers and seemingly meaningless abbreviations to some but they’re a long-winded way of truly emphasizing Jaskin’s prowess. Despite never being seen as a defensive-maestro, Jaskin proved to be just that during the middle of his career. Yet, he was confined to minimal ice time, no penalty-killing work, and shunned by many Blues fans.

Of course, a player can’t earn a promotion simply from strong defensive play. While that’s certainly an important part of the game, top-six players need to perform on the other end of the ice as well. Surprisingly, the signs seem to show that Jaskin would’ve been perfectly capable of this as well. In the 2014-15 season, Jaskin’s rookie season, he scored 13 goals in 54 games. This put him on pace for roughly 20 goals that year, more than star-names like T.J. Oshie, Jeff Skinner, Brayden Schenn, and Nicklas Backstrom scored that year. While ‘on-pace’ is a poor way to judge, the advance stats for Jaskin’s 2014-15 season back up his strong play.

Of course, there’s a stat to get around the poor evaluation of ‘on-pace’, goals-for-per-60. During the 2014-15 season, Jaskin ranked sixth among the Blues lineup in this stat, behind only Tarasenko, Jori Lehtera, Oshie, David Backes, and Alex Steen; essentially the Blues top-six. Relative to his teammates (relTM GF/60), Jaskin again ranks sixth behind the same five players. This simply puts Jaskin in great company. Of these five players above Jaskin in these stats, four of them scored over 20 goals that season, showing the potential Jaskin had.

In terms of xGF% (expected goals-for percentage), which gauges a player’s expected goals-for based on a load of shot-related factors, Jaskin’s rookie 2014-15 season ranks fourth among all Blues forwards to play between 2012 and 2017. Fourth. His xGF% of 58.96 is beaten only by Vladimir Tarasenko’s 2013-14 season and Jaden Schwartz’s 2013-14 and 2015-16 seasons. That is absolutely mind-bending. That year, Jaskin also had a CF% that ranks seventh among forwards in this five-year span, with his 2015-16 season coming in close behind at ninth place.

Jaskin was also always one step ahead of his linemates. His Corsi plus-minus relative to his teammates (relTM C±/60), a stat that helps show just how good a player is at possessing the puck and dictating play on his lonesome, was outstanding through his entire career. Three of his four seasons with the Blues ranked among the top-20 for Blues players between 2012 and 2017. This includes two in the top-10. Of the 17 top-20 slots that aren’t Jaskin, 11 are Blues stars like Tarasenko, Schwartz, Alex Steen, and Paul Stastny, showing the true level Jaskin played at, individually speaking, throughout his short-lived career with the Blues.

All of these are nothing more than numbers but they spell a clear picture: Jaskin should have received top-six minutes in 2014-15, (or even 2015-16) instead of averaging a mere 13:28 in ice time and spending most of the year as either a healthy scratch or AHLer. If he would have, there is seemingly no doubting that he would have thrived offensively, scoring at a rate similar to current Blues stars, while also adding a tremendous boost to a Blues defense that was already strong that year.

There is absolutely no telling how a breakout season in 2014-15 could have affected the then only-21 Jaskin. It was his rookie season, making all of these dazzling stats so much more impressive, and his signs of a breakout were met with neglect instead of the spotlight that he deserved. It clearly broke the young Jaskin, as he never was able to match the play he showcased that season. In a different world, surely not too far from our own, Jaskin is serving as a crucial member of the Blues top-six instead of the KHL, where he is currently playing and has 50 points in 47 games.

Patrik Berglund is a bit of a trickier name to include on a list of historical misuse. He burst onto the scene in his rookie year with a 47-point season. Two years later he would tally 52. This quickly placed him on par with Oshie and David Perron, creating a trio of young Blues that would go on to change the entire face of the organization. However, of the three, Berglund fell off fairly quickly. He shined when players like Oshie and Perron joined him on the team’s bottom-six but was left behind when both players were given more ice time. Now the sole star of the bottom-six, Berglund struggled to manage a consistent scoring level. He became a regular double-digit scorer but, after his third year in the league, never managed over 40 points.

For a Blues roster that searched desperately for a top-six center endlessly through the 2010s, Berglund’s misuse was truly egregious. Even in his later years with the Blues, Berglund remained a prolific scoring threat. During the 2016-17 season, Berglund netted a career-high 23 goals. This tied him with James Neal, Phil Kessel, and Nicklas Backstrom in goals.

He did this all in less than 16 minutes of ice time on average; a terribly low number considering his scoring total. It was a dominant showing, proving to fans that Berglund boasted a true potency; something that his advanced stats had screamed for years prior.

In the 2015-16 season, for example, Berglund ranked 32nd among the entire league in xGF%. His 56.59 in that category ranked him higher than players like Alex Ovechkin (a 50-goal scorer that year), Connor McDavid, and Oshie. The threat that Berglund, who netted 10 goals in 42 games, boasted that year was incredible. At a per-60 rate, his xGF drops to 36th in the league; still above star scorers Filip Forsberg, Taylor Hall, and Tarasenko.

Berglund’s underlying stats were consistent throughout his entire career. showing the true poise and skill Berglund was never given a chance to use. While these are again just numbers, they back up an urge that fans had throughout Berglund’s entire tenure in St. Louis. He seemingly always had more to give, a potential that Buffalo hoped to bank on when they acquired him in the Ryan O’Reilly deal.

That clearly didn’t come to fruition. Berglund fell out of favor after only 23 games in Buffalo. While this can be chalked up to a host of different factors, one was made evidently clear. Berglund knew what he had to offer, didn’t want to be dealt away from the Blues, and preferred to leave the NHL entirely rather than play for any other team. It was a dazzling case of Blues-loyalty from a player who never got the chance he deserved in St. Louis. Now, Berglund is continuing his strong offensive play in Sweden’s top-league with 22 points in 33 games, hopelessly waiting for the Blues to reach out with a new contract offer. Berglund-faithfuls are similarly awaiting that new offer, hoping that a return to St. Louis will spell a newfound opportunity for Berglund to put his dazzling advanced stats to use.

Vladimir Sobotka is another case of a player that seemed to always have more to give. Looking at his advanced stats, it seems he actually had plenty more in the tank. The numbers seemingly back up Sobotka’s riled emotions from 2014, when he left St. Louis for the KHL after feeling misused by the Blues.

Sobotka joined the Blues in 2010 and left for the KHL in 2014, playing a total of 247 games over the four-season stretch. In his first year with St. Louis he tallied 29 points; in his last, 33; and during the 2012-13 lockout season he was on pace for 32. For a bottom-six player, this is a tremendous stretch of production and well worthy of respect, something that the Blues couldn’t provide before Sobotka’s dramatic departure.

Although it seems these numbers came from Sobotka’s worst-self. Each of Sobotka’s seasons rank among the top-50 Blues years in terms of xGF% between 2010 and 2014 (5, 21, 43, 50). This showcases the true quality of the offense Sobotka brought to the table during his first stretch in St. Louis. His relative xGF± shows how much of an impact he made on the ice. In the same four-year stretch, Sobotka ranks seventh, 26th, 34th, and 40th. The former two rankings, which actually represent his two latter seasons, were defiantly positive stats, putting Sobotka in a conversation with players like Oshie, Tarasenko, and David Backes.

While there are plenty more stats to bring to the table, his xGF% seemingly says enough. In his first four years with the Blues, Sobotka scored admirably despite averaging just over 16 minutes of ice time through the stretch. With more ice time, more faith, more special team chances, and a bit of luck, the Blues could’ve easily found a way to double Sobotka’s stat-line. If they did, there’s no telling where Sobotka would be now. He surely never would’ve left for the KHL and could easily still be a viable part of the Blues top-six today, where his offensive skill and relentless grit would meld perfectly.

Yet, that reality never took place. Instead, Sobotka’s chances were limited and he never managed more than a 33 point-season with the Blues. He’s now stuck in Buffalo, where he’s fighting tooth-and-nail to find the player he once was but is being halted by constant injury and, in the case of last season, admittedly poor play. Still, optimists can only think there’s a light at the end of the tunnel for the could’ve-been star.

All stats from this article were taken from the amazing work at Evolving-Hockey.com. Follow Evolving-Hockey on Twitter @EvolvingWild, where you can find more info and ways to support the great work they do.