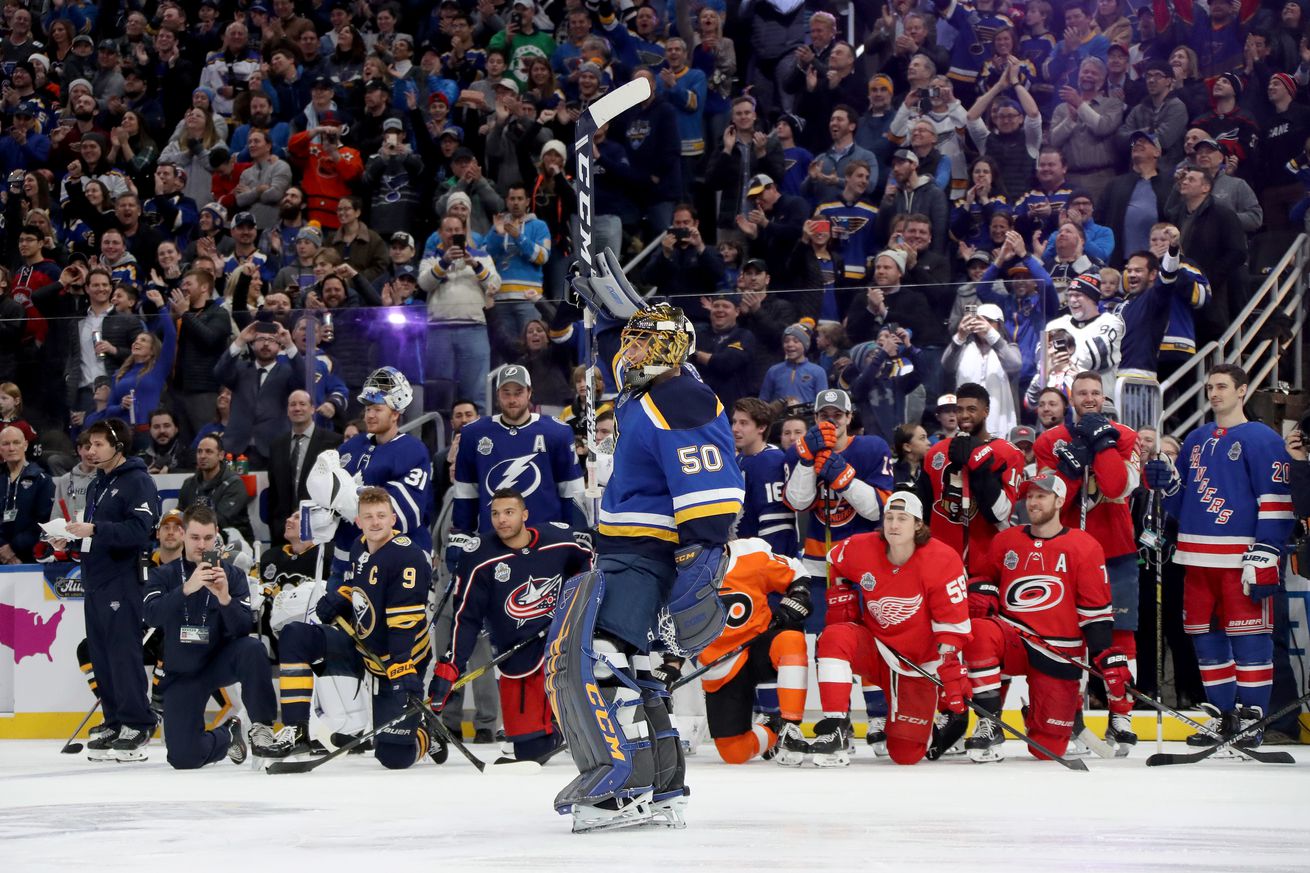 Jordan Binnington won the Save Streak and the Blues brought out the alumni to play.

The All-Star Skills competition is more or less an amuse bouche to the main course the following night. It’s an opportunity for players to have fun, for the league to test out new ideas, and for the host team to add a bit of flair to the festivities.

Flair can mean a lot of things. In St. Louis, it means pretty consistent booing of one Mr. Patrick Kane:

Patrick Kane first on the ice in St. Louis and draws a round of boos thanks to Nathan MacKinnon, who had Kane take a lap before allowing rest of players to join.

That was funny. #Blackhawks pic.twitter.com/5q5cKeKWfT

This is not the only instance of Kane being mercilessly razzed by the Blues fans. He also was trargeted during player introductions, during the NHL Shooting Stars event, and basically every single time his skate touched the ice.

The events roster was trimmed of the passing competition and the relay event, which sped the evening along at a pretty quick clip. The first event of the evening was the NHL Fastest Skater, which Connor McDavid could’ve easily won had he not stumbled a step. Matthew Barzal skated away with the win with a time of 13.175.

The Honda NHL Accuracy Shooting competition introduced a video board element that crumbled the targets when struck. In theory. In practice, it didn’t foolproofedly register contact like a styrofoam target does, and some well-placed shots did some damage to the glass, which caused a delay.

The targets had some fun player details written on them, but Alex Pietrangelo’s didn’t match up to his career. They matched up to Hall of Famer Bernie Federko’s, though.

Bernie came out to make a few passes to Pietrangelo, who finished the event in fourth place, with a time of 13.673 seconds. Jaccob Slavin of the Carolina Hurricanes won the competition with eight shots in 9.505.

The NHL Save Streak competition reminded everyone that the Blues have a Stanley Cup winning goaltender. Sure, Binnington doesn’t have the best stats in the league this season, but 16 wins as a rookie to win the Cup ought to earn him some respect. If you, for whatever reason, didn’t believe that he was the real deal before tonight, the outcome of the event might not change your mind. But it should at least make you a belieber that he could take on Justin in a shootout.

Ten saves in a row? Against NHLers? Bieber should be the nervous one.

The Elite Women’s 3-on-3 took a little bit to get some momentum going. During the pre-event Q&A, Brianna Decker discussed that the women’s game is just now using the three on three format in U18 tournaments and games, so the more experienced players aren’t used to it. The goalies were warned that there would be odd-man rushes, and there were, but what fans were treated to wound up being a goaltending clinic by Ann-Renee Desbiens (15 saves) and Alex Cavallini, who made 14 saves in a 2-1 loss. The women played two ten minute running clock periods, and while the only goal for the Americans came from Hilary Knight, Amanda Kessel very nearly tied it at the final buzzer.

The crowd was invested in the game from puck drop, cheering louder for Knight’s goal and for both goaltender’s theatrics than for probably any other event of the night. The ladies’ curtain call prompted a large ovation, and more than one person on social media to wonder if women’s soccer is so huge, why can’t women’s hockey be as well. The NHL has been focused on marketing the sport through special events and broadcasts, among other initiatives, which hopefully will combine to encourage a grassroots interest that grows into a national one.

After the ice was re-surfaced, the final two events followed. The Hardest Shot competition featured an introduction of one Mr. Al MacInnis, who is someone you might know from putting a puck through the boards on a few occasions. Al’s slapper clocked in at 100.4 MPH, which, if accurate, means that he still has more juice than 95% of the league.

If a player beat Al, $5000 per shot went to the charity of their choice, which was a fun idea. To exactly no one’s surprise, Shea Weber won the event with a shot of 106.5 MPH, That’s about a mile and a half an hour under his previous winning speed, but it’s still fast enough to make you cringe in sympathy whenever you see a defender or goaltender block one of his shots.

The grand finale of the evening was the newest event, and you could tell that it was the newest event – the Gatorade NHL Shooting Stars competition had a few rough edges that will probably be sanded out with time. Part ultimate golf, part hockey, the selected players had to shoot balls at targets of various point values. The biggest target, a (not to scale) Gateway Arch, was worth ten points. Aiming for it became the most efficient way to rack up some points.

Matthew Tkachuk brought his dad, Keith Tkachuk, up for a shot and some family photos on the jumbotron. The highlight of Tkachuk’s performance wasn’t his aim, which he said afterwards he wasn’t even thinking about. It was this:

Matthew Tkachuk winning over the crowd with his Molina jersey. #STLBlues pic.twitter.com/G0wVdQ35ON

I don’t think the son of one of the Blues’ most recent beloved alumni has to do much to win his hometown crowd over, but if there was someone in the seats of the Enterprise Center tonight who was on the fence, then I think this did the trick.

Ryan O’Reilly was not to be outdone. If you were wondering when St. Louis’ favorite adopted son and t-shirt slogan machine was going to make an appearance, this was the time. Brett Hull took a thwack at one of O’Reilly’s shots, sent it flying off somewhere, and somehow did not fall off of the podium. He did say something about “being under the Arch, but now he’s going to put on in the Arch,” so if the t-shirt makers out there want to take a crack at that, be my guest.

Patrick Kane, much to the crowd’s consternation, broke the tie with Mitch Marner and O’Reilly to win the final event of the night.

The Blues and St. Louis were well-represented this evening, but tomorrow night is when the real fun happens.