The St. Louis Blues have reached a contract with Jordan Kyrou, signing the young forward to a two-year deal. The contract carries an average annual value of $2.8MM, paying Kyrou a total of $5.6MM. 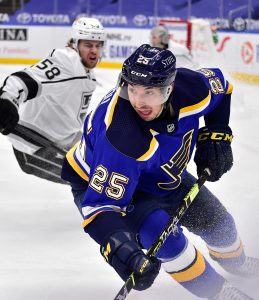 Kyrou, 23, broke out this season, finally showing off the high-end upside that made him the 35th overall pick in 2016. An outstanding skater, he posted 14 goals and 35 points in 55 games, almost all of which came at even-strength. With players like Jaden Schwartz, Mike Hoffman, and potentially Vladimir Tarasenko all leaving the Blues this offseason, there will be a real opportunity for Kyrou to take another step forward in 2021-22.

If he does, that $2.8MM cap hit will suddenly look like an extreme bargain, given he would have been eligible for salary arbitration next summer. Instead, he’ll lock in at a reasonable number and try to establish himself as one of the team’s most important forwards. Still, he won’t be handed a top-line role right away, as Pavel Buchnevich and Brandon Saad were also added on the wings this offseason. Both will be making quite a bit more than Kyrou, meaning he could still find himself playing third-line minutes and seeing rare powerplay time. That could be a way to keep his next contract down, but it’ll be hard to keep him bottled up if he continues to improve.

For the Blues, a $2.8MM contract leaves them with about $3.5MM left to spend this summer. With Zach Sanford and Robert Thomas still to sign as restricted free agents, that isn’t a lot of wiggle room. The big move will still be Tarasenko, which could clear as much as $7.5MM off the cap if the team makes a trade without any salary retention. Once Kyrou and the others are signed though, the team will know exactly how much it can retain in order to facilitate the best return.