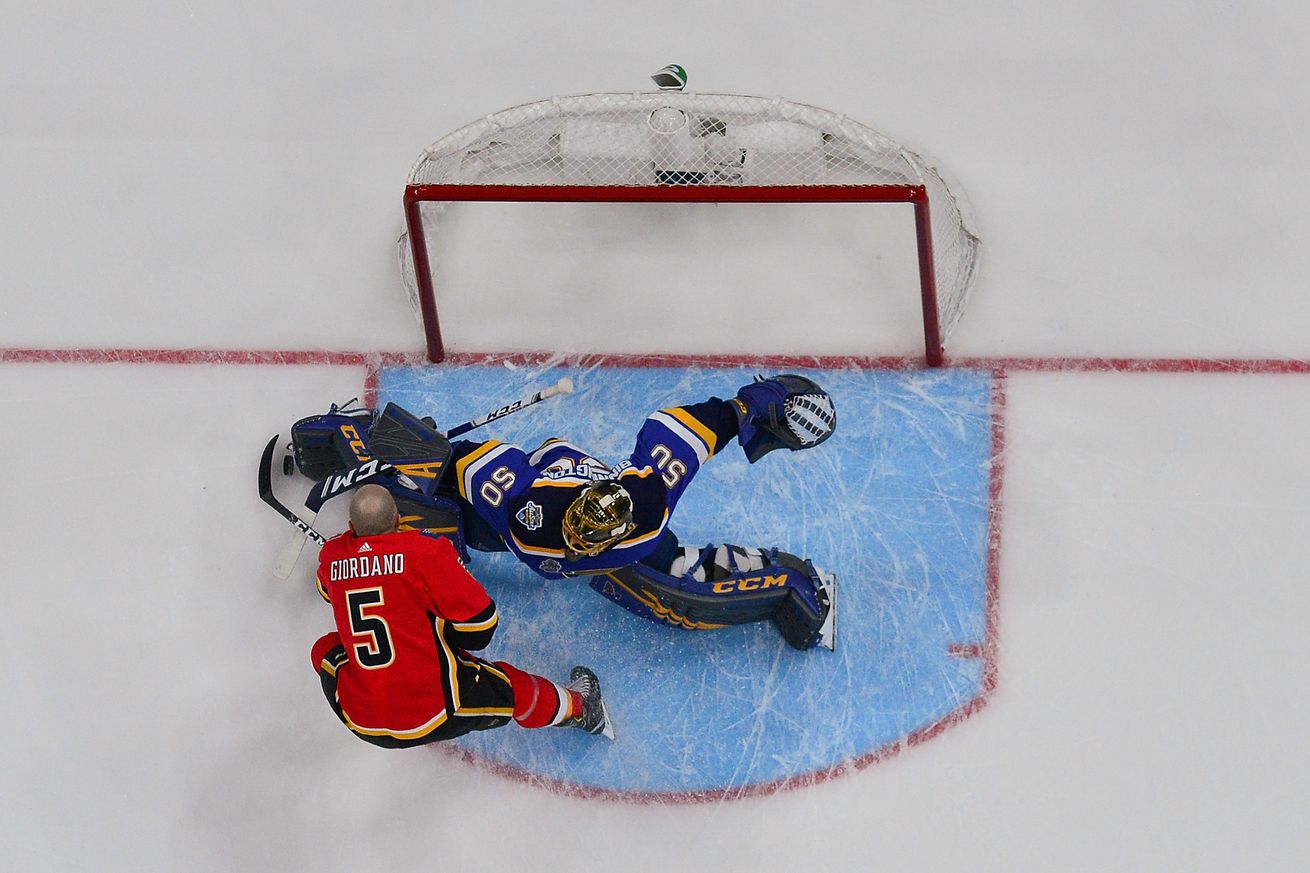 “I didn’t even know who Curtis Joseph was.”

My initial easy answer was to tell the lovely lady in the backseat of my Uber that he was Jordan Binnington back in the 1990’s, but I wasn’t sure it would stick. Over the past 12 hours, it has become more viable.

The woman was traveling with Andy, a Twitter follower of mine who was exhilarated even in the early hours of Saturday morning after a night stuffed with NHL All Star Game festivities. At some point on Friday night, Andy was sharing space with Brett Hull and a guy Blues fans know as “Cujo.”

Back in the day, which was also a Friday night by the way, Joseph was the savior in net. For four seasons, Joseph was the guy in net for the Blues. The Chosen One who would help Brett Hull and Brendan Shanahan hoist a Stanley Cup in St. Louis. And then, then head coach/General Manager/professional shit stain Mike Keenan, traded his rights to Edmonton. Thankfully, Doug Armstrong shares little in common with Keenan, so Binnington is safe.

Joseph was an elite goaltender. He once saved 57 goals above average in net during the 1992-93 season, where he also 2,202 shots from the opposition. That was over 2,000 shots in just 60 games. Back then, a 3.00 goals against average and .900 save percentage was considered great since the rules were different and shooters had more freedom. Stick Binnington or any current starting goaltender 25 years back in time, and it’s a different look on their score sheet. There is no doubt.

With no disrespect to stalwarts like Brian Elliott and even Vincent Riendeau (who was in net before Joseph’s arrival), it’s “Cujo” who sticks out to me as “The Guy” in net when I look back at the Blues in my lifetime. When I think of Binnington and what he’s doing, I think back to that guy in net giving his team an unfair advantage in net. After all, this past November, Binnington paid tribute to Joseph with a specialized goalie mask.

Binnington took center stage in front of the world this week as the All Star Game events unfolded, but truth be told, he’s been in the limelight for over a month and arguabl for an entire year. It was Ryan O’Reilly who said Binnington was the glue who kept the team together and pushing during the Cup run last summer. It was Binnington’s play that represented the X-Factor.

It goes beyond the sprawling saves, effortless poise, and million-to-one-shot story: Binnington’s confidence and swagger are a big play these days. He is super-comfortable in his own skin, ready for challenges and taking all of it in. It’s like there’s a 35-year-old in that mid-20’s kid’s body roaming around. It can’t be written enough that it’s that poise and confidence, the ability to climb over obstacles and brick walls brought on by fierce NHL talent, that will keep him in the net in St. Louis for a long time.

There’s no doubt. Binnington is going to be here for a while. There is no sophomore slump, no inability to handle the pressure of being a defending Stanley Cup champion. It wasn’t just the fact that he was a boss on Friday night in the skills competition, stoning every challenger with about 60% of effort; it’s the bounce-back mental strength that will keep him among the top 10 goalies in the league.

He’ll sign another extension, win a lot more games, and stand tall. If he was going to fall, it would have happened already. You can’t put the cart before the horse if the cart has a Stanley Cup ring on it. Binnington is something else, from the net protection status all the way down to his taste in music and challenging pop artists.

Over the past few weeks, after Binnington challenged Justin Bieber to a skill competition, movie and television stars chimed in on the potential match-up, including recent award nominee Adam Sandler. While the “Uncut Gems” star sided with Bieber for the sheer fact that he could lull Binnington to sleep with his music on the way to the net, it was still the Blues goaltender being talked about. A far cry from what was being discussed about the Blues, which was next to nothing.

Due in large part to Binnington, things have changed. A bittersweet memory of what could have happened if Joseph had never been pushed out. Maybe the Blues break the drought earlier. Maybe they don’t.

I felt it was necessary to inform my passenger about who Joseph was, and who stands in his place now.