7:20am: While unrestricted free agents often dominate the headlines at the start of free agency, it’s also a day when players that are entering the final year of their contracts can sign extensions.  It appears one of those will be Blues center Robert Thomas as Daily Faceoff’s Frank Seravalli reports that the two sides are closing on an eight-year, $64MM extension. 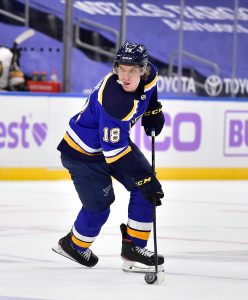 After a tough injury-riddled 2020-21 campaign that saw the 23-year-old put up just three goals and nine assists in 33 games, St. Louis pushed for a bridge contract last summer, eventually agreeing to a two-year, $5.6MM pact that was identical to the one that Jordan Kyrou had signed a month earlier.

It’s safe to say that the Blues got a fantastic return on the first year of that deal as Thomas put up 20 goals and 57 assists in 72 games last season, good for second in team scoring behind Vladimir Tarasenko.  On top of that, his playing time jumped up by more than five minutes a game to 18:36 while becoming an all-situations player.  In other words, he performed like a true top center.

He’s certainly about to be paid like a top-line center as the $8MM AAV of this deal nearly triples his current price tag and would make him the Blues’ highest-paid player for 2023-24.  This contract will buy out his final two remaining RFA-eligible years and then give St. Louis six extra years of team control beyond that.

St. Louis has $18MM coming off their books in the summer of 2023, the bulk of that coming from $7.5MM expiring deals for Tarasenko and Ryan O’Reilly so GM Doug Armstrong certainly has some flexibility at his disposal to give Thomas this type of contract.  He’ll likely want to keep O’Reilly while Kyrou will be looking at a significant raise of his own and by the time those two deals get done between now and next summer, most of their savings will already be spent.  But they’ll have Thomas locked up through the prime of his career and if he can continue to improve, this contract could become a team-friendly one down the road.