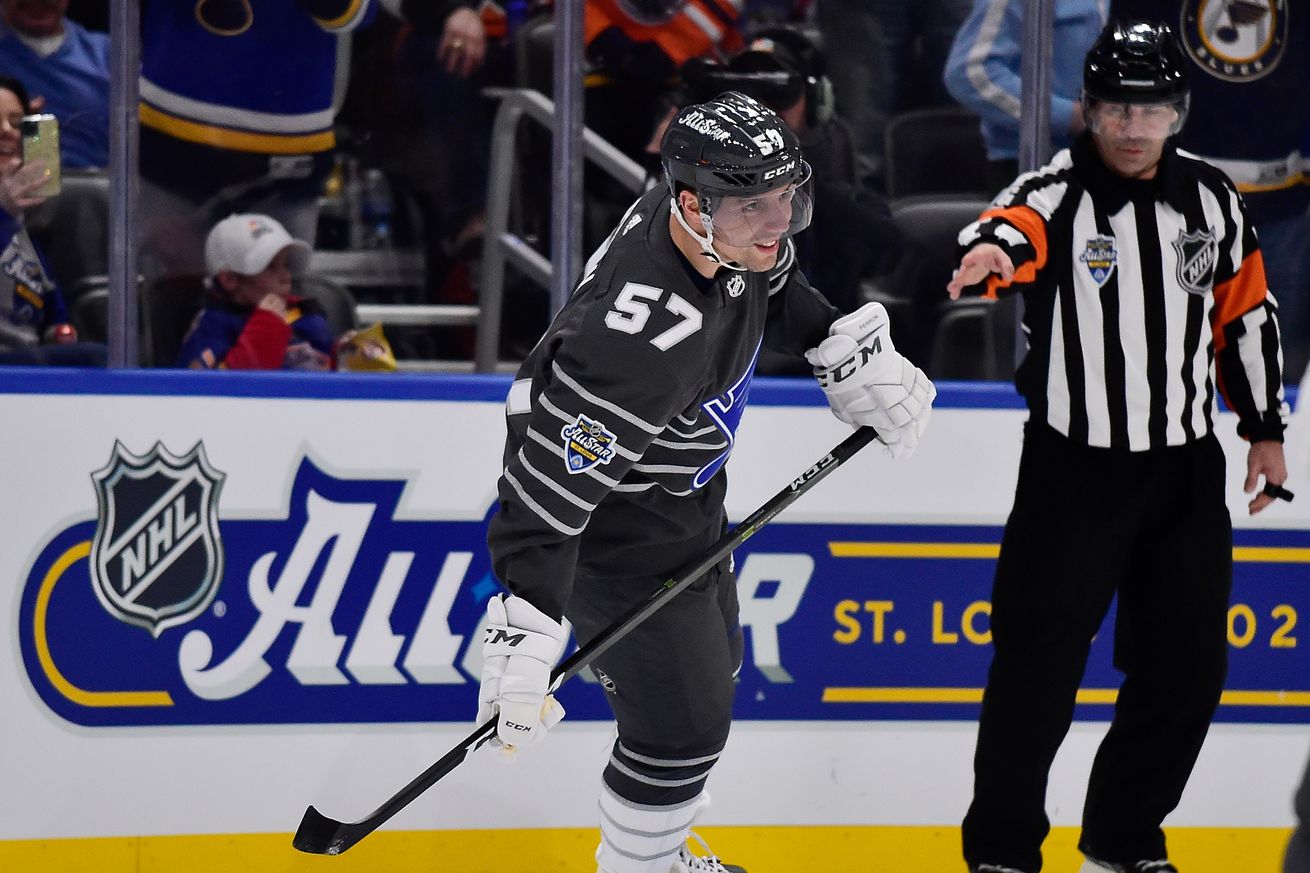 Connor Hellebuyck is no longer welcome in this building. But more on that later.

Game One – Atlantic vs. Metro:

T. J. Oshie can probably run for mayor of St. Louis and people would vote for him. That is a take-away that I got from the first three-on-three scrum. The other take-away from this scrum is that Blues fans do not like David Pastrnak, because he played for the Bruins, who is the team that the Blues beat in the Stanley Cup Final.

There are a lot of goals here, because it’s an All-Star Game and no one exudes any effort. Fun fact: Shea Weber was credited with a hit! Seth Jones finished up with four points to lead the Metropolitan Division (1G 3A), and Anthony Duclair and Pastrnak each had a hat trick and a goal for the Atlantic. The Atlantic skated away victorious, 9-5.

Chief did it. Craig Berube started an all-Blues lineup tonight and he kept the hometown team together. Despite a 10-5 drubbing, the game gave us two moments. One, was the Enterprise Center not knowing how to express appreciation and disgust at the idea of Patrick Kane scoring. The other was last man in David Perron’s goal, with assists from O’Reilly and Pietrangelo:

The game was tied at four after the first period, and then the wheels came off of the goaltending wagon. Luckily, that wagon did not belong to Jordan Binnington. Connor Hellebuyck finished allowed six goals on 16 shots. All-Star games are never fair affairs for goaltenders but it would be fair to wonder where Ben Bishop was tonight. The correct answer is, of course, sitting on his couch watching this and laughing.

As makes sense, this game wasn’t the lopsided blowout that the other two were. The defense looked tighter, the goals were less soft… it was almost as though there was the realization that there was a $100,000 purse on the line.

Sorry, $100,000 worth of future donations to charity were on the line. That’s better.

The Pacific skated away with the win with a score of 5-4. This is their third win as part of the 3-on-3 format.

While the temptation could be to vote for a member of the Blues for MVP, the clear deserving winner was either the Bruins’ David Pastrnak’s four goal, two assist night or the San Jose Sharks’ Tomas Hertl and his five goal performance. Since it was up to the fans to vote, the winner was Pastrnak. Congrats on your Honda CRV Hybrid.